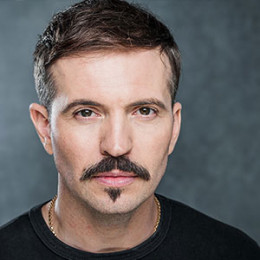 Tygh Runyan is a famous American-Canadian actor better known for his roles in the movies like Road to Nowhere and Stargate Universe. He has also recognized as the lead guitarist of the famous indie rock band The Awkward Stage.

What is the Relationship Status of Tygh Runyan? Who is he married to? Know about his personal life, wife, Children

Tygh Runyan is currently married to the famous Canadian tv actress Sarah Lind. The bond between the seems solid as they are in a marital relationship for more than twenty one years.

The pair shared the wedding vows in 2008 in a private ceremony among their close friends and family. SGU Stargate Universe cast is a family man who spends quality time with his spouse and kids in the meantime. Besides, he never lag behind showing affection to his better half.

Despite being parents of two beautiful children, daughters the duo haven't yet disclosed the identity of kids. Even more, they manages to keep the planning of the kids to themselves. Tygh's younger child is often seen with her father on PDA or socials.

All things must pass, some things much sooner than you think. #valentinesday @theportraitsessions @travisstevens

The American-Canadian actor loves to play guitar and keyboard. Likewise, he is an animal lover and owns a cat named Sterling which is named after Sterlin Morrison who was the guitarist of the famous band Velvet Underground.

What is the Net Worth of Tygh Runyan? Know details about his Salary, Income and Earnings

Tygh Runyan holds an estimated net worth of $3 million all thanks to his successful acting career. Further, the average salary of an American actor is $81,000, however, it depends on the production of the film and the popularity of the brand.

Popular musician and actor Tygh Runyan spending his time at his house.

Runyan starred in many films starting with the 2001 film 15 Minutes along with Kelsey Grammer and Robert De Niro. After that, he worked in many blockbuster films and television series which includes Stargate Universe, Various Positions, Comforting Skin and Road to Nowhere and ended up working with Carly Pope, Terry Chen and many more.

In the year 2001, Runyan started the Amigos Solos Theather Company with screen friend James Huston. In addition, their production for David Mamet's American Buffalo was praised and loved by many people. Similarly, Tygh started his own company Forever bad Media Ranch where he directed the science fiction short film Eclissi.

Tygh Runyan was born on 13 June 1976 in Vancouver, British Columbia, Canada under the Gemini birth sign. He holds both American and Canadian nationalities. He grew up between a small fishing town surrounded by Vancouver and Denver. Further, he studied at Emily Carr University of Art and Design.

The famous Hollywood personality Tygh Runyan at the riverside in Denver.

Except for his acting career, he also worked as a guitarist in many bands. First, he formed a rock band Beans with his two high school friend and ended up releasing 5 albums with the band.

Likewise, he worked as a lead guitarist for indie rock band The Awkward Stage. Moreover, he currently plays both guitar and keyboards for the LA-based band Corredor. He was also a black belt in Yoshinkan Aikido.

Flashin' some Broncos pride in Paris!! Let's do this fellas!!! #denverbroncos #superbowl

Be sure to check out Marriedwiki.com for more biography.

Tygh Runyan is currently married to the famous Canadian tv actress Sarah Lind. The bond between the seems solid as they are in a marital relationship from one decade.