Born and raised in Minsk, Belarus, Victoria Azarenka is a well-known Belarusian tennis player. She is also Olympic gold medalist, and the first woman in Belarus to achieve a "Grand Slam Singles title".

Azarenka's other achievement includes two mixed doubles Grand Slan titled, a bronze medal at the 2012 Summer Olympics, and a gold medal in the mixed double at the 2012 Summer Olympics with pro-Belarusian tennis player Max Mirnyi.
With a good amount of net worth, Azarenka is living a luxurious life, and as far as her personal life is concerned she has moved on from her split with ex-boyfriend Billy McKeague.

Victoria Azarenka was born on 31st July 1989, in Minsk, Belarus. She was born to her father Fedor Azarenka and mother Alla Azarenka. She also has a brother named Max Azarenka. Azarenka is of Caucasian ethnicity and holds Belarusian nationality.
Azarenka began playing tennis since her early age of seven when her mother who worked at the tennis club handed her a racket and told her to hit the ball against the wall. In short time, Victoria Azarenka began interested in tennis and wanted to be a professional tennis player.

When I was little #babyVika

At the age of 15, Victoria Azarenka moved to Scottsdale, Arizona, for training. She was later helped by the famous NHL goalie Nokilao Khabibulin and his wife, who are also her mother's friends.

Azarenka competed her first professional match in 2003. After two years, Azarenka won the Junior Australian Open and the Junior U.S. Open. She was also listed as the first Belarusian woman to be named an ITF Junior World Champion.

The same year, Azarenka also won ITF's Women's Circuit title in Luxembourg. In 2006, Azarenka was listed on the WTA's Top 100 list.
Following this, Azarenka won the Bank of the West Classic in 2010, however, she had hectic years overall. She was retired from many games because of her injuries, and during the U.S. Open, Azarenka shockingly collapsed on the court at the time of her second-round match.

In 2012, Azarenka won the ninth WTA title at Sydney, before winning against Maria Sharapova in the final of Australian Open to receive her first Grand Slam title. Her ranking went up from no.3 to no.1.

Happy #thanksgiving to you all #teamvika

After a year, Azarenka started the season at the 2013 Brisbane International, as her first appearance at the tournament since receiving the title in 2009. She reached to semi-finals but was withdrawn from her scheduled match oppose to Serena Williams because of her infection on a toe.

In 2017, Azarenka played at the 2017 Mallorca Open and won her first match against Risa Ozaki. She lost in the second round to Ana Konjuh.

Victoria Azarenka got a wildcard entry for the Australian Open but was out of the tournament due to her running custody battle. On 16th Jan, it was announced that she won her custody battle hearing, and is waiting to resume her career playing at 2018 BNP Paribas Open.

In 2012, Victoria Azarenka first dated Redfoo, an American musician. The pair dated for two years but unfortunately separated. Later, she was in a relationship with professional golf player Billy McKeague. The couple first met in Hawaii.

The pair also welcomed a son together, Leo(born 19 December 2016). The couple, however, separated, after 2017 Wimbledon tournament. Following the split, they got involved in a legal child custody case for their son in Los Angeles County California court in August 2017.

Today I had my hardest fight and my very best victory! Our son was born healthy and happy! So thankful and blessed! Thank you

Due to the custody case, Azarenka was withdrawn from the 2017 U.S. Open and other tournaments held in 2017, because she didn't want to travel to tournaments without her child.

As The New York Times reported, she could not take her son out of California, where her son was born. In 2018, January, it was reported that Victoria Azarenka won the first round of the U.S. custody proceedings. The judge of Los Angeles County initially said that Azarenka and McKeague's case should not be proceeded in L.A. but in Azarenka's birthplace Belarus.

Throughout her whole career, Victoria Azarenka has made many rivals with other players on the WTA Tour. Azarenka's rivalry with Maria Sharapova and Serena Williams are the most noted rivalries on the WTA Tour. All three players have competed against each other more than fifteen times.

Victoria Azarenka has earned a huge sum of net worth from her career as a professional tennis player. She has also been listed no. 6 as the highest paid athlete according to Forbes, with annual earnings of $9.5 million. As of 2018, her total net worth is estimated to be $18 million.

In 2012, the Australian tennis player set a new record for single-season prize money receiving $7.9 million. She also made $9 million from endorsements deals. With more than $28.1 million as prize money, she is listed as the fourth woman on the list of WTA prize money leaders and the youngest in the top ten.

Azarenka also owns a Beach house in Manhattan worth $7 million. The house is built on 4,280 square feet with five bedrooms and 4.5 bathrooms. 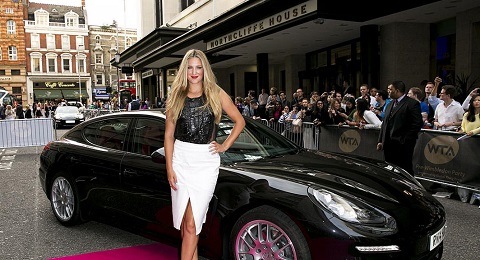 He was born on 19 December to Billy McKeague and Victoria Azarenka, after the couple split, Leo lives with his mother.