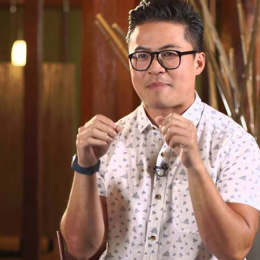 Viet Pham is one of the popular celebrity chefs in America. He caught the limelight after winning the Iren Chef America cooking television competition in 2012. The 40-years-old chef also received the Best New Chef Award from the Food & Wine Magazine.

Personal Life of Viet Pham; Is He Married?

Viet Pham is engaged to the love of his life, Lexy. The duo shares a good bond and is together now for over two years. They officially announced about their relationship when Lexy posted a picture on her Instagram account with Viet standing on her knees with a ring. Here take a look at the picture;

Pham is out of any rumors and controversies regarding his personal life and professional life. In fact, he is living his life happily with a dating relationship with Lexy. Additionally, the relationship between the couple seems fluid as there is no sign of break up between them and eventually there will be no wonder if they soon share the wedding vows.

The Iron Chef America star is also an active person on social media and often shares pictures regarding his personal as well as professional life. What's more, he loves to go on vacations with his soulmate and are always spotted together anywhere they go.

What is the Net Worth of Viet Pham?

Viet Pham holds an estimated net worth of $200,000. He collected that fortune by working in many restaurants as a chef. In addition, the average salary of a chef is $46,000 per year.

Famous Vietnamese chef Viet Pham along with her fiance in a function.

Pham started his career as a chef by working at the Casey's Irish Pub Downtown where he was hired in 2006. After gathering some valuable experience and business ideas, he later opened his own restaurant, Forage in Utah with co-chef Bowman Brown.

The celebrity chef collected many achievements in his career. In fact, in 2011 he received the Best New Chef Award from the Food & Wine Magazine. Further, he took part in the competition named Iron Chef America in 2012 and ended up winning the competition by beating Chef Bobby Flay in the finals.