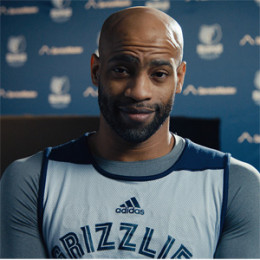 An American professional basketball player, Vince Carter is currently playing for the team, Atlanta Hawks of the National Basketball Association. He is most famous for playing with Toronto Raptors. With his great playing skills, he became one of the seventh players who played at least 20 seasons in the NBA. Besides his professional life, he is currently married to Sondi Carter after divorce from his ex-wife, Ellen Rucker.

Vince Carter was born Vincent Lamar Carter on 26th January 1977 in Daytona Beach, Florida with the birth sign Aquarius. He is American and belongs to Afro American ethnicity. His parents, Michelle Carter and Vince Carter Sr. raised Carter along with his siblings Alicia Scott, Chris Carter, and Jeff Scott.

Regarding his academics, he finished his schooling at Mainland High School in Daytona Beach, Florida and later joined the University of North Caroline and graduated in 1998. He earned a degree in African-American studies.

Carter, the professional basketball player, currently associated with Sacramento Kings began his basketball career right from his schooling. Due to his fantastic playing skill, he became the star of McDonald’s All-American, Parade in 1995. For his excellent playing, he was even awarded Basketball Player of the Year and was also voted for the USA Junior National Team after which he played many of the World Championships. 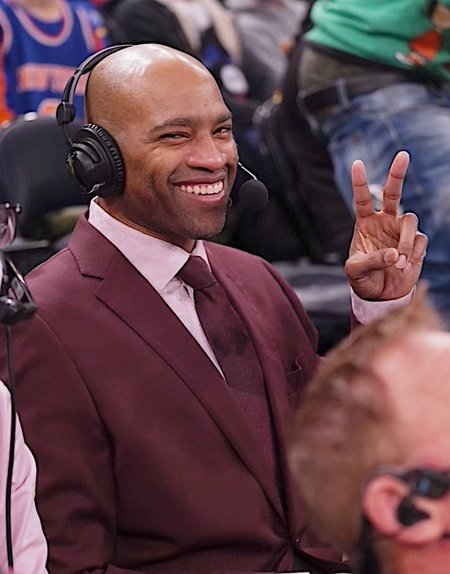 After joining college, Carter began playing for the college’s team under the guidelines of coaches, Dean Smith, and Bill Guthridge. In the 1997-98 season, Carter along with other members Ed Cota, Ademola Okulaja, Mukhtar N’Diaye, Antawn Jamison and Shammond Williams played under Guthridge where he secured 15.6 points a game. In the junior and sophomore seasons, Carter led the team in ACC Men’s Basketball Tournaments and also in the Final Four.

Carter’s professional career in basketball began after being drafted in NBA by the Golden State Warrior and later was traded to Toronto Raptors. In the rookie season, he made his notable performance and as a result, was honored NBA Rookie of the Year and the Sportsman of the year for NBA’s Central Divison in 1999.

The winner of the NBA Slam Dunk Contest, Carter, represented his country on the Olympic Basketball Team in 2000 where he won a gold medal for the team. Carter earned appreciation and applause for his outstanding performance and even was nicknamed Half-Man, Half Amazing, Air Canada and Vinsanity.

After Carter played for several teams, he was listed among the five amazing players including LeBron James, Michael Jordan, Kobe Bryant, and Julius Erving. As of 2011, he scored his 20,000th career point and became the 30th player in history to make such a score.

In late June 2020, Vince Carter made the announcement of his official retirement from his Basketball career from the NBA. The father of two previously announced in 2019 his plan on retiring in 2020. Before retiring, he renewed his contract with Atlanta Hawks he had been playing with since 2018.

Regarding the personal life of Carter, he is currently in a marital relationship with NASM Elite trainer, Sondi Carter, after the divorce with his ex-wife, Ellen Rucker, a chiropractor (sister of Antawn Jamison). 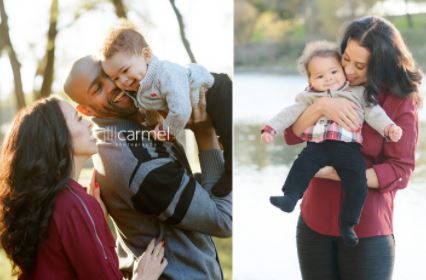 He and Sondi exchanged vows in a close-knit ceremony, surrounded by their loved ones. Furthermore, the duo also shares two kids between them, a boy, Vincent Lamar Carter Jr., and a girl.

Vince is a dotting father and even etched the name of his children on his new line of shoes.

Talking about his past marriage, he and Ellen tied their knot on 3rd July 2004 in an intimate ceremony in the presence of limited guests. They were having a good relationship until they divorced in 2006, two years after their marriage. 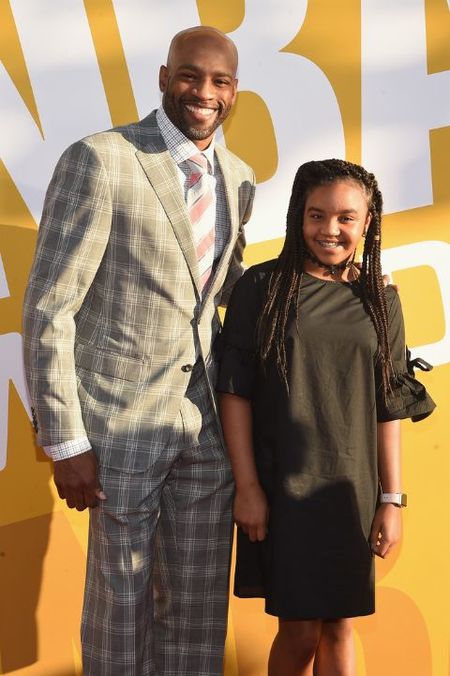 Carter and his ex-wife, Rucker share a daughter, Kai Michelle Carter together who now lives with her mother and stepfather, Bakari Sellers (a CNN analyst).

Apart from his married life, he suffered from a kidney stone in 2017 that made him miss seven games in the season. He also faced several injuries while playing the matches. After leaving the team, Raptor became the first player to retire his jersey number.

Net Worth of Vince Carter

The 40 years old basketball player, Carter has an amazing height of 6 feet 6 inches (1.97m). After playing so many games, he collected an estimated net worth of $60 million whereas his annual salary, as of 2019, is 2.565 million. As of 2017, his salary increased to $16 million with an extra $5 million from the endorsements.

Besides, Carter has also signed several contracts with various teams from which he grabbed an eye-catching amount. Firstly, he made $94 million from a six-years extended contract with the Raptors in 2001. Secondly, a 4 years contract with New Jersey net, worth $61.8 million, lastly a year contract with Sacramento Kings for $8 million.

Related to his endorsement, firstly, he signed a contract with Puma which was later on dismissed due to some issues. Nike cleared the amount of $13.5 million which he owed from Puma including $1 million lawyer fee and other extra $5million after making a deal with Nike worth $30 million. SO, after the payment of the debt, he received only $11.5 million as a contract amount.

Besides, his earning, he owns a Windermere, FL Mega-Mansion and a collection of luxury cars including Bugatti Veyron that costs $1.5 million.

For all the latest biography on your favorite celebrities, make sure to follow MarriedWiki!!!

On 3rd July 2004, Vince Carter tied the knot along with a chiropractor named, Ellen Rucker who is the sister of Antawn Jamison. But the relationship did not last long and separated in 2006

After divorce with Ellen, Vincent Carter got married to Sondi Carter, a NASM Elite Trainer. Together they share two kids.

A year later the marriage of Vince Carter and Ellen Rucker, they welcomed their first child on 1st June 2005 and named her as Kai Michelle Carter. After the divorce of the parents, she is currently living with her mom.

Sondi Carter and Vince Carter also share a baby girl between them but they are yet to share any info about her.