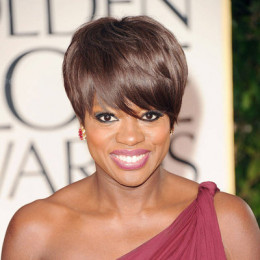 Moving on to her personal life, she is a happily married woman. She married her boyfriend with whom she has been for a long time. The couple has adopted a daughter under mutual understanding.

She is the stepmother of her husband's sons who are from his previous relationships. There is no rumor or controversy about her. She has stayed loyal towards her husband from the day she met him.

In all life's ups and downs.... Even with all the accolades... my greatest treasure are my loves. My heart. My Julius and Genesis! Happy Valentine's Day pic.twitter.com/roYyB3NoL7

She celebrated Valentine's Day with her loving husband and daughter. She shared her happiness via a Twitter post.

She is stepmother to Tennon's son and daughter from his previous relationship.

She received a break in her career in 2008 playing in the drama Doubt. She received an Academy Award nomination for Best Supporting Actress for the same role.

In addition, she was nominated for the Academy Award for Best Actress playing in the comedy-drama The Help in 2011.

She is the founder of the production company, JuVee Productions along with her husband. She is regarded as one of the 100 most influential people in the world by Time magazine in 2012 and 2017.

He is an actor and producer who is known for Small Soldiers, Dazed and Confused and Faster.

She is a pretty girl born safe and sound. She was adopted in October 2011.