Home Article Thousands Rally In Women's March Protest In LA Including Hollywood Actresses Halsey, Natalie Portman, Viola Davis, Jennifer Lawrence and so on! Scarlett Johansson Calls Out James Franco During Her Speech In The Rally

Thousands Rally In Women's March Protest In LA Including Hollywood Actresses Halsey, Natalie Portman, Viola Davis, Jennifer Lawrence and so on! Scarlett Johansson Calls Out James Franco During Her Speech In The Rally 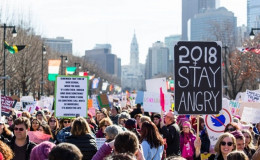 Thousands Rally In Women's March Protest In LA Including Hollywood Actresses Halsey, Natalie Portman, Viola Davis, Jennifer Lawrence and so on! Scarlett Johansson Calls Out James Franco During Her Speech In The Rally

On Saturday, January 20, thousands of women stood up to support the global Women's March, organized by Women's March London.

The event comes after one year as last time millions of women marched together to support equality and justice for women in all the seven continents. The event was also named as "Time's Up" rally to honor the anti-harassment and gender equality campaign instigated by the Hollywood actors and several actresses including Viola Davis, Natalie Portman, Scarlett Johansson, Eva Longoria and so on who took up the stage to deliver powerful speeches.

Thousands Rally In Women's March Protest in LA Including Hollywood Actresses Halsey, Natalie Portman, Viola Davis, Jennifer Lawrence and so on! Scarlett Johansson Calls Out James Franco During Her Speech In The Rally

Despite the heavy rain and sleet, the 2018's Women's March Time's Up Movement covered the entire streets of different states and it was definitely one of the largest women's protests compared to the past years.

Apart from the women's rights activists like Helen Pankhurst and Reni Eddo-Lodge, who were a part of the rally in London, several leading actresses of Hollywood were seen supporting the event in LA. Following the sexual harassment Weinstein scandal and several other revelations of such cases inside the entertainment industry, the actresses have come up with the Time's Up movement and #MeToo movement. 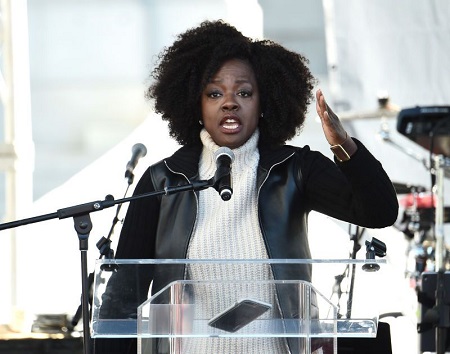 Many actresses took up the stage to deliver some empowering speeches including Oscar-winning actress Viola Davis. She passed on a passionate and powerful speech stating,

"In the words of my fellow American Malcolm X, I’m gonna make it plain. The greatest nation on this planet, put into place some horrific laws: In 1877, America put laws in place called the Jim Crow laws," and those laws "restricted the rights of quadroons, octoroons, blacks, Hispanics, Malays ... they restricted medical, relationships, education, in all, “they restricted life."

She went on saying,

"I'm not ready to wait a hundred, or two hundred years, for things to change, time needs to be helped by every single moment, doing right. We only move forward when it doesn’t cost us anything, But I’m here today saying that no one and nothing can be great unless it costs you something.”

Along with Davis, The Black Swan actress Natalie Portman too delivered a shocking speech sharing her first encounter with her being objectified at a very young age by a fan. For her first film, Leon: The Professional, she received a fan mail. 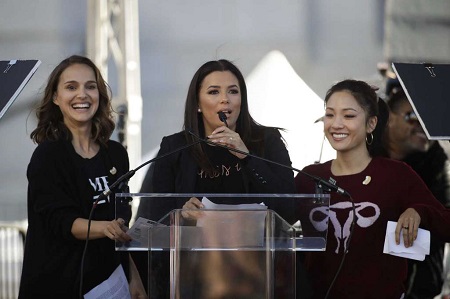 "I opened my first fan mail to read a rape fantasy that a man had written me. I understood very quickly, even as a 13-year-old, that if I were to express myself sexually, that I would feel unsafe. And that men would feel entitled to discuss and objectivity my body."

Unlike Natalie and Viola, Scarlett Johansson publicly called out James Franco during her speech at the March in LA. The event that started from Pershing Square around 8:30 am featured several celebrity speakers along with Johansson who allegedly asked James Franco to return back her pin. 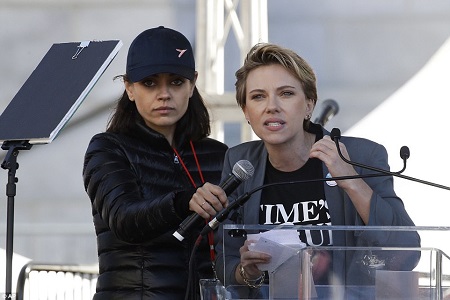 James had worn the Time's Up pin during the Golden Globes following which he was accused by five women of sexual misconduct and harassment.

Scarlett blasted the actor for claiming to fake-support the Time's Up movement as she started by saying,

"My mind baffles. How could a person publicly stand by an organization that helps to provide support for victims of sexual assault while privately preying on people who have no power?'

Although Scarlett didn't take the name of the Disaster Artist star her reps confirmed that she was referring James Franco. However, fans got angry over her act as she didn't mention the director Woody Allen who was also dragged into sexual allegations in the past.

She has defended Woody Allen in the past as she starred in three of his movies- Match Point (2005), Scoop, (2006) and Vicky Christina Barcelona( 2014). When asked about the allegations, Johansson had stated,

"It's not like this is somebody that's been prosecuted and found guilty of something, and you can then go, I don't support this lifestyle or whatever.

I don't know anything about it. It would be ridiculous for me to make any kind of assumption one way or the other."

Fans took Twitter to bash the actress claiming how she's only calling out Franco but not her director Woody Allen.

“I think it’s irresponsible to take a bunch of actors that will have a google alert on and to suddenly throw their names into a situation that none of us could possibly knowingly comment on.”Scarlett Johansson aboutWoody Allen and yet she’s doing the EXACT SAME THING WITH FRANCO

But Scarlett has not yet reacted to the backlashes on Twitter while James is still denying all the allegations pinned on him.