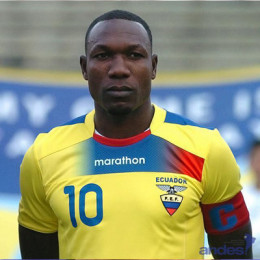 An Ecuadorian professional football player Walter Ayovi who plays as left wing midfielder for both Ecuadorian National Team as well as for Pachuca of the Liga MX and previously for Club Deportivo El Nacional. He started his youth career from Rocafuerte and then for Emelec. He is a cousin of Jaime Ayoví, who is also player of Ecuadorian national team. He is nicknamed as Macaco.

Ayovi, 38, started his professional career from Emelec in 2000. After two years in Emelec, he was transferred to Barcelona Sporting Club on 23rd January 2002.

Despite several rumors being linked to several European clubs, he remained and played for the Barcelona's squad until 2006.

In March 2009, CF Monterrey thought to purchase him after an outstanding game between Brazil and Ecuador.

On 26t July 2015, he signed a deal with Dorados de Sinaloa and joined Christian Suarez, Segundo Castillo, and Marcos Caicedo.

He was called in the final squad for the 2002 FIFA World Cup. As he was one of the youngest players in the Ecuador team, he didn't appear in the tournament.

He was a consistent player in the Ecuadorian national team; the team that qualified for the FIFA World Cup 2006 in Germany but he was not in the final World Cup squad.

He, however, participated in the 2007 Copa America. He scored a free kick against Colombia in a pre-tournament. His appearance became the substitute against Mexico and as a starter against Brazil in Copa America. 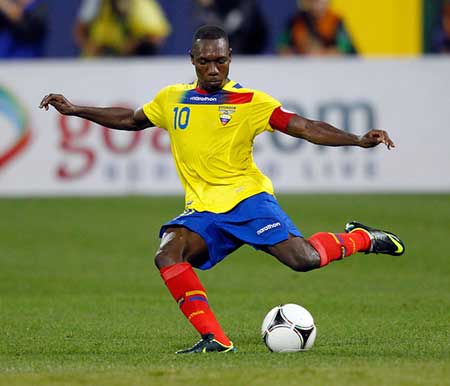 Walter Ayovi in a game against Chile at CitiField in August 2012
Source: Zimbio

He was one of the important fixtures in Ecuador playing in the CONMEBOL 2010 World Cup qualifiers. He played against Argentina leading Ecuador to a 2-0 win.

He played in all the 16 of the qualifying games for Ecuador during the COMMEBOL 2014 World Cup qualifiers. He was capped for the 100th time in a 2-1 friendly loss to Argentina in New Jersey on 31st March 2015.

It was the same year he was selected in Ecuador's squad playing in the 2015 Copa America.

Being a well known professional football player, he's paid well but the sports star hasn't revealed details about his current net worth.

His salary and fortune are still under study.

Ayovi, standing at a height of 5.61 feet (1.71m) hasn't revealed details about his family and personal life. His amazing professional life is something that has attracted people towards his personal life but the star has maintained everything under the radar.

They were in relation from very young age. Though there is not so much information available about her, couple's picture can be found in internet.