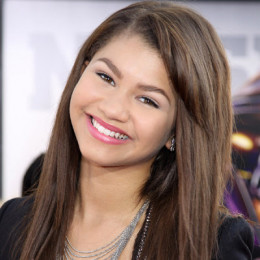 A gorgeous and beautiful American actress, singer and dancer who is better known as Daya or Z. Talking about her education she attended Oakland School for Arts and studied her craft at the Cal Shakes Conservatory Program. She was inspired by her mother in field of acting career who used to work as house manager in a theater. At very young age she started her career with dance group named Future Shock Oakland.

Zendaya was born as Zendaya Maree Stoermer Coleman on September 1, 1996. Her father, Kazembe Coleman is African-American with Arkansan roots and her mother, Claire Stoermer is white with German and Scottish ancestry. So, Zendayshe has mixed ethnicity and holds an American nationality.

Coleman was raised in Oakland, California along with her three sisters and two brothers. She is a well-known actress, singer, and dancer who rose fame through Disney sitcom Shake It Up.

She has learned hula dance from the Academy of Hawaiian Arts. Before entering into the world of television, Zendaya has performed as a backup dancer for Selena Gomez. She was a model for Macy's, Mervyns and Old Navy. Coleman was featured in an iCarly toys ad.

Coleman began her acting career in 2010 when she got a chance to feature in Disney production Shake It Up. In 2011, she released her promotional independent single, Swag It Out and the same year she released Watch Me featuring Bella Throne.

Besides acting and singing, she lent her voice in animated series too. In 2014, she cast as the main character for a movie named Zapped along with Spencer Boldman and in 2015, she began playing KC Cooper on Disney's KC Undercover.

In 2017, she appeared in the film Spider-Man: Homecoming with Tom Holland, Donald Glover, Marisa Tomei, Robert Downey Jr. and much more.

Currently, Zendaya is linked up with her Spider-Man: Homecoming costar Tom Holland but the duo neither accept their relationship nor deny it. She isn't married which simply implies she has no husband and children.

The versatile and talented singer and actress is rumored of dating her best friend. Though she interviewed in media saying that he is only her friend and she also asked to pull off the rumor regarding them as boyfriend and girlfriend, but they were spotted a couple of time dating and also attending awards ceremony together.

Most of the time Zendaya was rumored to be in a relationship with her co-star. During the starting phase of her career, she was linked up with Adam Irigoyen but at that time she was just 13. So, this rumors never get wings.

She has past affairs with Trevor Jackson and Spencer Boldman. Even Coleman was linked up with Odell Beckman Jr. but she always claimed, he was just his friend not boyfriend.

Zendaya prefers to call herself proclaimed feminist and she is vegetarian.  She currently lives in LA with her family and a pet dog named Midnight.

Zendaya Coleman has maintained a decent amount of net worth from her acting and singing career. She succeeded to earned $5 million (2017) net worth. She is rising star of Hollywood. Despite this, she is living a lavishing life.

In March 2017, she owns a new house costing $1.4 million in Northridge Mansion. Her feature film,  Spider-Man: Homecoming (2016) grossed more than $117 million at the box office on its first weekend.

Zendaya celebrated her 20th birthday by running a campaign which supports Convoy’s Women’s Empowerment Initiative and she succeeds to collect $50,000. Besides this, she owns a 2017 BMW 2 series which market value is around $44,400.

Check out the video where Jimmy Fallon interviewed Zendaya Coleman on his show, The Tonight Show Starring Jimmy Fallon,