'Walking Dead' Star Chandler Riggs Once Dated Brianna Maphi; Now Having An Affair With Someone? 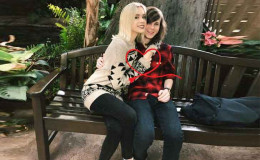 It's so sweet and amazing feeling to have a loving companion by your side during every moment of your life. Walking Dead star Chandler Riggs who gained wide media attention and huge fan followers after performing in the TV series is enjoying his life with a new love after a couple of unsuccessful dating life in the past.

It's so sweet and amazing feeling to have a loving companion by your side during every moment of your life. Walking Dead star Chandler Riggs who gained wide media attention and huge fan followings after performing in the TV series is enjoying his life with a new love after a couple of unsuccessful dating life in the past.

Who is his new girlfriend? Has he made his relationship official? Let's get every detail in today's session.

Chandler Riggs' Personal Life; Does He Have A New Girlfriend?

It seems that The Walking Dead actor Chandler Riggs is in love all again!

Riggs' Instagram posts are making his fans speculate that sometimes is going on between him and Instagram star Haleigh Hekking. 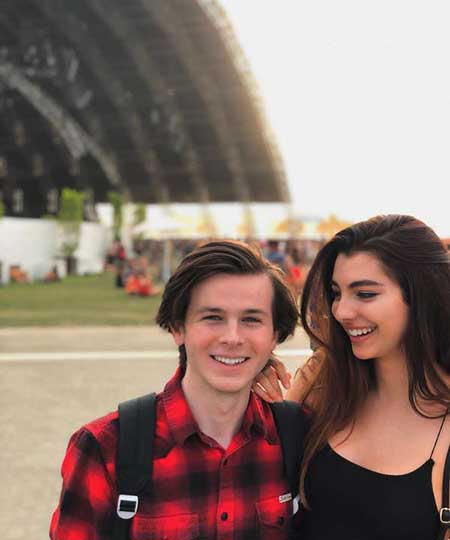 Have a look at the rumored couple Riggs and Hekking in a post below. Don't you think something is definitely going on between the two?

scariest part was paying $15 for a burger

In March 2018, she tweeted that she's very proud of Riggs. Well, the red heart sign definitely speak the same language that we all are thinking of!

She also celebrated Riggs' birthday and posted an image with him on 28 June 2018.

*wins a saturn award on his birthday*

Though everyone though the amazing couple is going on a perfect pace, her post back in March 2017 raised a lot of questions among their fans. She uploaded an image hugging another guy and captioned 'Incapable of love'.

Well, Riggs and Hekking haven't spoken a word regarding their relationship. Will they come out as a pair or some other story is hidden behind the curtain?

Let's wait and watch what happens the next!

Chandler Riggs' Past Affairs And Relationships

Riggs, 19, was previously in a relationship with American actress Hana Hayes who is best known for her role in TV shows like Law & Order: Special Victims Unit and Bucket and Skinner's Epic Adventure.

Sources reported that the two started dating in April 2014. They frequently appeared on each others' social media posts. Their relationship lasted for as long as 2 years as they split in 2016.

After breaking up with Hayes, he started getting closer with social media star Brianna Maphis. The two first met in 2015 when both were on a cruise ship. Maphis reportedly opened about her first encounter with Riggs via Twitter post. 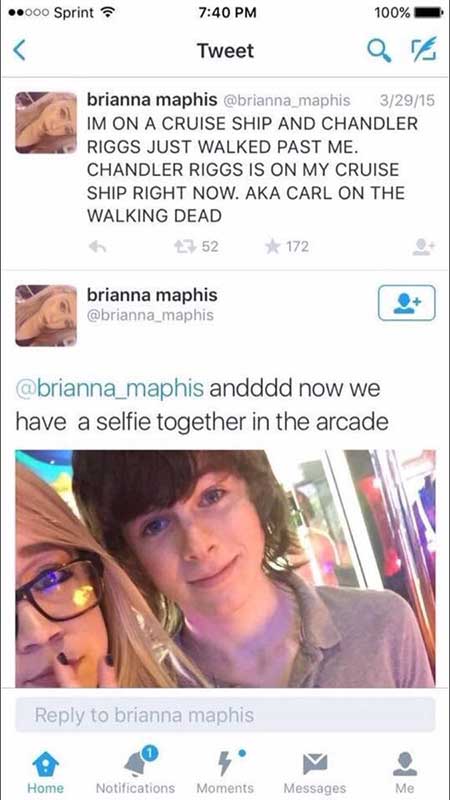 The duo started dating in 2016 and spent most of the time with each other.

wishing a very happy bday to my best friend i love you sooooo much pic.twitter.com/qZ6era6g7b

Maphis frequently appeared on Riggs' Instagram posts that are all removed after they broke up shortly after being an item in 2016. 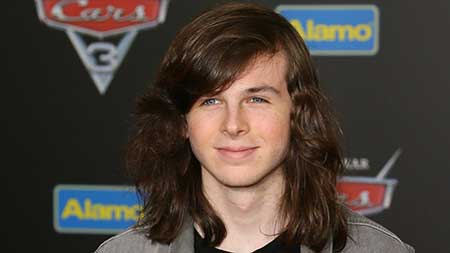