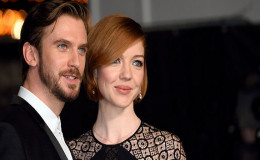 English actor Dan Stevens is best known for his role in The Guest and Night at the Museum: Secret of the Tomb. As of 2017, we saw him in the FX series 'Legion' playing the role of David Haller.

He is married to singer Susie Hariet since the year 2009 and the couple shares three adorable children together. Know more about his family and children here.

'The Beauty and the Beast' star Dan who starred opposite Emma Watson met Susie while both of them were performers in the English steel city of Sheffield.

Susie is a South African jazz singer and also a singing teacher at present.

The former Downton Abbey actor once revealed that he met Hariet in the year 2006 in England. See what the star said:

"We met and it was pretty instant."

He further elaborated his feelings in an interview with the Australian,

"She was just beautiful, that’s all there was to it."

The theatrical couple tied a knot in 2009. Susie was six months pregnant with her daughter, Willow during the marriage ceremony.

Dan once said that he's very lucky to be married to someone so caring and sensitive. Also, she is extra concerned with his professional career.

You May Like; Matt Lauer, the latest crush of actress Tyra Banks: Matt is happily married to wife Annette Roque

The heavenly couple was last encountered together on the red carpet at the premiere of Steven's TV series Legion in January 2017.

Stevens and Susie are the blessed parents of three adorable children. Their first daughter Willow Stevens was born in 2009.

Stevens' Permission co-star Rebecca Hall is the godmother of Willow. Stevens and Hall also appeared together in the Shakespeare play As You Like It at Brooklyn's BAM theater.

The pair shifted to New York in 2012 all the way from London and it was the same year their son Aubrey came on earth. Their third child Eden was born in 2016.