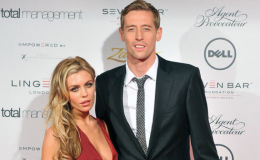 Being a parent is one of the best happiness in the world. Professional Football player, Peter Crouch just had that moment after having a baby boy with his wife Abbey Clancy.

Having married a famous model Abbey Clancy, Peter Crouch is most probably living a great loving life. The question arises; how did they meet? How did they get married? What's their married life like? Well, let's find it out from the article below!

Goalscorer Peter, 38, Crouch recently welcomed a baby boy on 3rd June 2019 with his long love model and wife Abbey Clancy. The proud parents were super excited with the blessing that entered their lives. 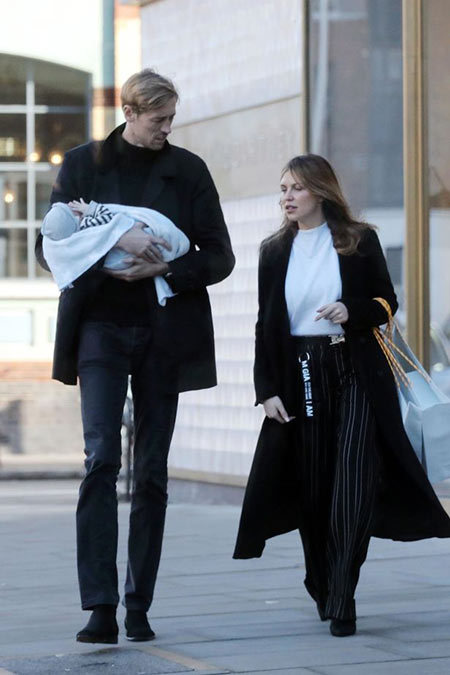 Peter Crouch and his wife walking on the street with a baby boy.
SOURCE: Mirror

Crouch was quick to let his fans and follower know about the situation. He shared a post in his Twitter sharing the name and date of his newborn son. Have a look at the post!

The name of his son confused and brought laughter among the fans. He named him Divock Samrat Crouch which goes with the name from one of the players from his former club Liverpool.

You May Like: German player, Marco Reus and Wife, Scarlett Gartmann is a proud Parents of Daughter; Know More About their Family Life.

Recently on June 2, 2019, Liverpool won the prestigious UEFA Champions League and a striker Divock Origi contributed to the victory with an important goal. Well, now you know where the name came from. However, he later confirmed it was a joke,

"Our boy is beautiful the name is still to be clarified unfortunately Abs not going for Divock Samrat."

The couple had a happy and healthy delivery as both the mother and a son are healthy. Former Liverpool striker announced their pregnancy back on January 2, 2019, with a Twitter post.

Baby no 4 on the way
I blame @OfficialClancy for looking like this. pic.twitter.com/FwmoHWAH8I

The duo has been in a pleasant relationship and now are even delightful with a new entrant in the house. It looks likes scoring is pretty easy for the star striker as he's doing it on and off the field.

Burnley Striker Peter Crouch Married life And Children; Did He Try To Cheat Her In The Past?

Former Tottenham player, Peter Crouch has been married to the love of his life Abbey Clancy since June 30, 2011, and blessed with three children. Their daughter Sophia Ruby Crouch was born three months before their wedding, another daughter Liberty Rose Crouch born in 2015, and a son in 2019.

Though things are beautiful with the pair, he had to go through a rough time in the past with his now wife Clancy. 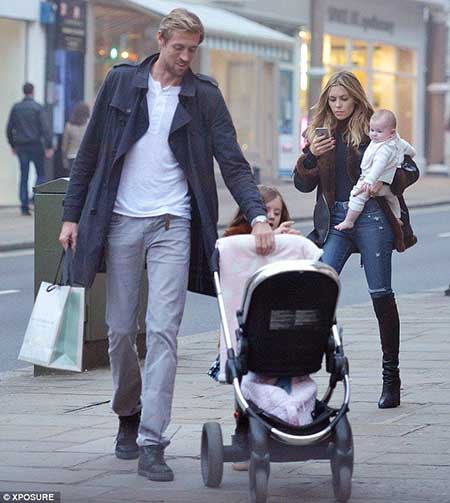 In the past, he was rumored to be dating model turned actress Lauren Pope. It was just a decent rumor that hit the media during 2005 and 2006. Well, there was no strong evidence supporting the speculation.

Also See: Who is Xherdan Shaqiri?

Marriage is a huge occasion in everyone's life and nobody wanna screw it up. Neither did Crouch, as he organized the function in a country hotel ceremony. Specifically, they tied a knot at an 18th-century church in the ground of a luxury Stapleford Park Hotel in Leicestershire and headed to Orangery at the hotel for a wonderful wedding reception. 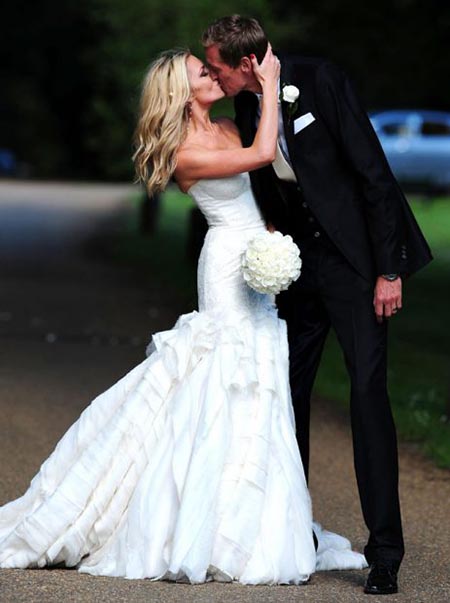 Abbey Clancy steps up to kiss her new husband, a 6ft 7in Peter Crouch.
SOURCE: Marieclaire

The bride looked gorgeous in a strapless corset-style wedding dress with a tiered silk skirt that costs around $10,000, which was designed by designer Giles Deacon. She matched the gown with droplet earrings and a loose tousled hair. On the other hand, Crouch went for a traditional black tuxedo with a white tie and white rose on his lapel.

You May Like: Football Player Tavior Mowry; is he Dating someone? Who is his Girlfriend?

Years earlier the England striker popped the question on July 15, 2009, and got happily engaged with her in Sardina while enjoying holidays. They started dating from 2005 and first met at a friend's party in Liverpool bar Mosquito. 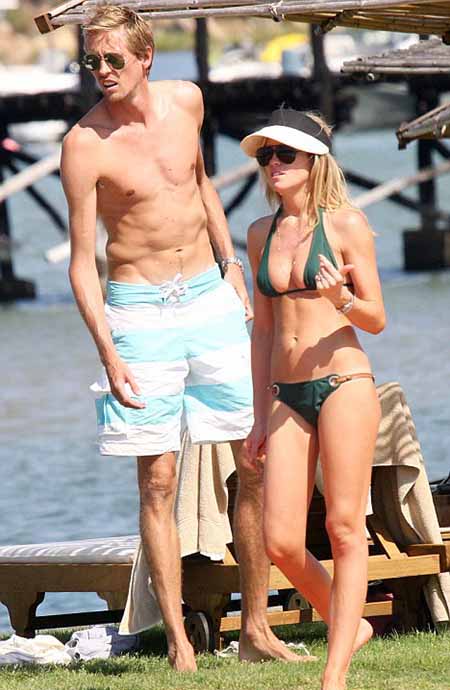 Peter Crouch and Abbey Clancy in Sardina where they got engaged.
SOURCE: Daily Mail

After their engagement, in 2010 Crouch got into trouble with Clancy as he was exposed paying $800 for sex to a vice girl Monica Mint aged 19 back then. The incident happened in Madrid in July 2010. The couple anyhow got along together as Clancy forgave him. Talking about it, Crouch said,

"We're OK, she's let me back into the house and everything's fine between us. We are happy and looking forward to the future together. She's a young girl and she gets worried. Things are much better now. Finally, things are getting back to normal. It's not been a great time but we're moving on - I think we're back on track. We're looking to the future. I love her very much."

Although it was not always easy, the love birds managed to stay strong with trust since a very long time. As it's almost been eight years since the pair started a new life as a husband and wife, we can only expect good things in the future. 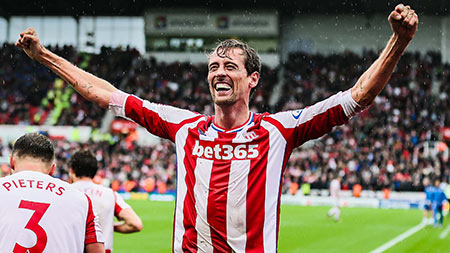 Visit marriedwiki.com/article for information on celebrities.