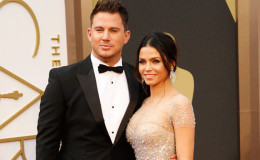 ‘Dear John’ star Channing Tatum is undoubtedly one of the sexiest actors of Hollywood and there are millions of girls out there who are crazy for him.

However, he is crazy about only one girl and she is his wife actress Jenna Dewan. The couple who got hitched in 2009 is living a happy and successful married life with a beautiful daughter named Everly Elizabeth Maiselle Tatum.

The duo first met on the set of 2006 popular dance flick, ‘Step Up’. Their crackling chemistry was highly appreciated by the fans.

Both the actors were equally attracted towards each other while filming the movie and soon after that they started dating.

In one of the interviews of Channing with Elle, he said, “I had just gotten out of a pretty long relationship, so I was in no way ready for another. I was trying to run from what I knew Jenna was—not someone I was just going to date.”

However, later on, one of the friends suggested him to take a move and “that night I showed up at her hotel room with a sombrero on, and that was it.”

After that the rest is history. Well, we must say sometimes you need to forget your past to lighten up your future.

Dewan and Tatum finally tied the knot on 11 July 2009 at a private estate overlooking the ocean.

The gorgeous bride was in Reem Acra gown and the groom was in Giorgio Armani and under the pepper trees which were filled with white and blush florals the pair exchanged vows.

The wedding venue was of course filled with Hollywood celebrities among which Marlon Wayans, Haylie Duff, and Nick Zano were one of them.

Similarly, another important part of the wedding ceremony is cake. Isn’t it? They had a cake in the shape of a castle filled with fairies in numerous flavors such as chocolate, red velvet and so on made by Cake Divas.

Their marriage ceremony was nothing less than any fairytale wedding. The couple got engaged in September 2009, when Tatum popped the question with a Neil Lane engagement ring.

The pair has been married for about eight years now and they still look very happy and in love together.

They certainly know how to make a marriage work. In an interview when asked about the reason behind his successful and long-lasting marriage he said.

“You have to want it. Jenna’s and my thing is checking in with each other all the time like ‘On a scale from 1 to 10, how much do you love me right now?’”

That was quite a sweet gesture what do you guys think? Similarly, they also spend lots of time together.
Tatum said,

“My wife and I go camping. There are no cell phones, no TV, no iPad, no nothing. We just sit by the campfire, and sip wine or beer and talk”.

Similarly, Jenna is also a loyal and loving wife when Channing was named People magazine's' Sexiest Man Alive in the year 2012, the happy wife said in an interview:

“That’s special because it says he’s achieved so much in his career and in his life that makes this award a possibility. But he’s always been the Sexiest Man Alive to me”.

We can definitely say that they are very happy with each other and their married life is also as successful as their love story.

Everly Elizabeth Maiselle Tatum, the gorgeous daughter of the couple

A child always completes the family. Similarly, in 2013 the small family of Channing and Jenna was completed when they welcomed their first child into their world.

Both of them seem to be a great father and mother to their daughter. According to Jenna, the child made their relationship even stronger. She said:

“As a whole, it just forces you to become a little closer, because you have to be on the same page with everything when it comes to making decisions.”

#tbt to Halloween with a little ??

When asked about the idea of having more children she said, “I do want to have more kids it’s in the cards for us. But right now we’re trying to get into the groove and enjoy the little baby that we have now. We’ll see what the future has in store for us.”

Jenna first started her career as an actor with now-husband Channing from the movie’ Step-Up’.
Afterward, she appeared in the movie, ‘Fab Five: The Texas Cheerleader Scandal’ where she was disciplinarian Coach Emma Carr.

In the year 2011, she was signed to play in lead in one of the series of NBC. However, the show got canceled after releasing only three episodes because of its bad reviews.

Similarly, after five years she shared the screen with the husband Tatum in the movie’10 years’. In 2012, she appeared in the second season of the horror television series, ‘American Horror Story: Asylum’ as Teresa Morrison.

Similarly, some of her other movies and television shows include, ‘Setup’, ‘Slightly Single in L.A’, ‘Balls to the Wall’, ‘Supergirl’, ‘Lip Sync Battle’, ‘No Tomorrow’ and so on.

Thank you to @fulfillmentfund for an incredible event last night! Everyone please check it out and support! pic.twitter.com/tg7sAXlurG

Six months after separating from her husband, Dewan officially filed for divorce in October 2018. The actress cited "irreconcilable difference" in the divorce papers.

Also, she requested joint custody of their 5-year-old daughter, Everly.

Sources reported that Channing is dating singer Jessie J for months while Jenna is romancing a mystery guy.

Earlier in April 2018, the actors declared their separation after nine years living as husband and wife.

"We have lovingly chosen to separate as a couple. We fell deeply in love so many years ago and have had a magical journey together. Absolutely nothing has changed about how much we love each other, but love is a beautiful adventure that is taking us on different paths for now."

"There are no secrets nor salacious events at the root of our decision—just two best friends realizing it's time to take some space and help each other live the most joyous, fulfilled lives as possible. We are still a family and will always be loving, dedicated parents to Everly. We won't be commenting beyond this, and we thank you in advance for respecting our family's privacy."

Well, the divorce is not finalized yet and details about the custody of their child is not declared.