Home Article Julie Chrisley and Todd Chrisley got married in 1996. Know about their children and family

Julie Chrisley and Todd Chrisley got married in 1996. Know about their children and family 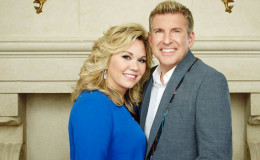 We all have seen the scandalous and funny family series "Chrisley knows best" which is an American reality show airing on USA Network. The series features Atlanta's millionaires Todd Chrisley and Julie Chrisley's family.

The Chrisleys have gained huge popularity through their reality show and their personal life seems to be very interesting as shown in the series. Let's go in more details to know about all the gossips and rumors relating to this fun and crazy family.

The Married life of Julie Chrisley And Todd Chrisley

Julie Chrisley, who is known as the perfect mother to the Chrisley's family, is famous for being the wife of rich entrepreneur and producer of 'Chrisley's Knows Best', Todd Chrisley.

Todd married Julie in the year 1996, just a year after when he divorced his first wife Teresa Terry.

According to online court records, Teresa Lynn Chrisley (now Terry) filed for a divorce in April of 1995 accusing Todd of severe domestic violence as well as sexual assault.

The news gained a lot of media attention, but it soon faded away.

A year later, Todd met Julie and started dating each other. After several dates and dinners, Todd and Julie finally decided to exchange vows and spend the rest of their lives together.

Julie Chrisley Was Pregnant Before The Wedlock!!

According to RadarOnline, Julie was pregnant before they got married. The couple then officially got hitched on May 25, 1996, giving birth to their own first child Chase Chrisley, just a week later.

A year later, Julie again got pregnant and gave birth to a daughter named Savannah Chrisley and later their youngest child, son Grayson Chrisley. Now, the couple has a beautiful family with five kids and their everyday life has been recorded as a reality show where you can know every little secret of this family.

Rumors regarding their divorce or split-ups have not been heard in the media, so there's a minimal chance of the couple getting a divorce.

Chrisley Knows Best: A Family You Must Know

Great morning with my partner for life @toddchrisley thanks for having us @ktla5news Sam and Jessica, you're the best!

USA's popular new reality show 'Chrisley Knows Best' is about a family that is funny, crazy and interesting to watch.

Who's ready for the finale! #chrisleyknowsbest

The reality series has earned the huge ratings and is currently in its fourth season, which was filmed mainly in Nashville, Tennessee. His son Kyle Chrisley is not the part of the show at present.

Following years of drug abuse, he lost his daughter's custody and was fired from the family show. Besides all the bitter past, he has no bad blood with his father; he's living a blessed life with wife Alexus Chrisley.

Their relationship started to crumble in public when Kyle threatened to kill his father.

The show mostly revolves around how perfect the family is, and how enormous their mansion is and little bits and pieces of problems like financial woes.