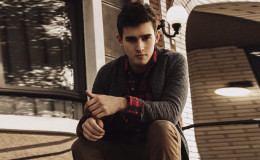 Michael Johnston is rumored to be a gay because of his gay role in Teen Wolf but he is on the way to prove it wrong.

There's a new teen hunk in MTV's Teen Wolf. He is none other than Michael Johnston who is best known for the role as Corey in the supernatural drama series.

He is mostly in the news because of the controversy relating to his sexuality. People started speculating him being gay after he played a gay character in Teen Wolf but Michael never preferred to answer those questions.

Michael portrayed the role of a gay in MTV's Teen Wolf. Because of his awesome dramatic portrayal, many people questioned on his sexuality.

Is he gay in real life? Well, playing the role of a certain character doesn't necessarily mean that the person is just the same in real.

It's literally a wrong step to doubt on one's sexuality until the person himself accept the reality.

Similarly, these days he seemed pretty cozy with a girl and we have seen her in most of his Instagram posts.

Her name is Cinta Laura Kiehl and she looks amazing together with the very guy. They are actually high school friends and most probably are in a romantic relationship.

Many of his fans are very happy to see them together. Many of them commented as " lovely couple" in their images.

Well, the story behind this is still a mystery. We are waiting for the star to reveal the fact about his romantic life soon in the following days.