Home Article Norah O'Donnell; see her Married life with Husband Geoff Tracy; And learn about her Career and net worth

Norah O'Donnell; see her Married life with Husband Geoff Tracy; And learn about her Career and net worth 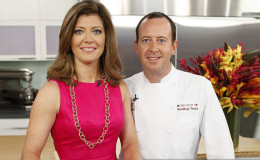 Norah O'Donnell married her husband Geoff Tracy and are living happily with three kids. She has well maintained her personal as well as professional life to her best.

An American print and television journalist Norah O'Donnell married her husband Geoff Tracy in 2001 and are living together happily with three adorable children since then.

In today's section let's know about her relationship, career and net worth in brief.

Norah tied a knot with the owner of D.C. restaurant Geoff in June 2001. Nora and Chef Geoff successfully became the parents of twins on May 20, 2007.

The beautiful couple named their twins Grace and Henry. 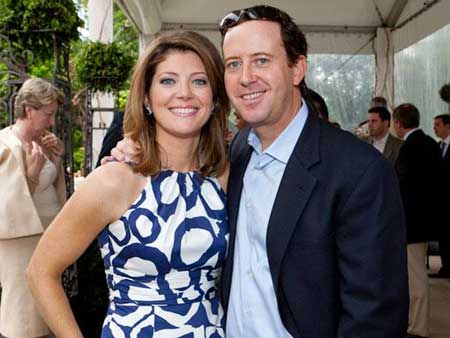 Norah with her husband in an event, Source: politico

Norah gave birth to her third child, daughter Riley Norah Tracy on July 5, 2008. She admitted that her daughter's name was suggested by Tim Russert who unfortunately died three weeks before the birth of the baby girl. 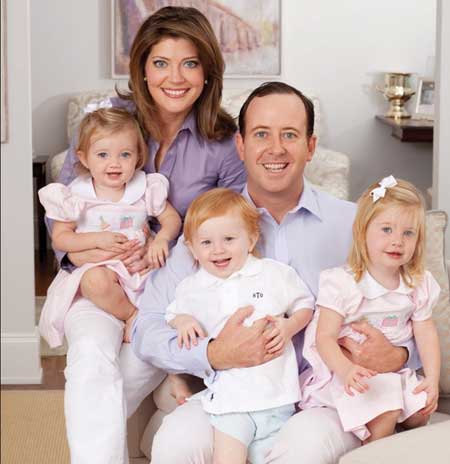 The duo published a cookbook together for other parents titled Baby Love which depicts their immense love for their kids. The book contains healthy, simple and tasty recipes for the babied which came to the market on 31 August 2010.

In an interview, she was asked about her work-life balance and she explained:

“No, I don’t care for the phrase “work-life balance”. I think it sets up these scales of justice where for me they’re the same — work and life — and those they’re supposed to be equal. I spend more time at work during the week than I am at home. I spend time with my children during the night, but they’re also at school during the day — I mean, they have lives, too.”

The cute couple is living their wonderful life with their children in Washington, D.C. Since they are very happy together, there is no any divorce rumors or any other issues in their relationship.

They have set an exceptional example maintaining their personal as well as professional life to their best.

Norah is considered as one of the outstanding women personality in the country. Initially, Norah served for Roll Call as a staff writer where she covered Congress.

Just finished up @cbsnlive with @jfdickerson and @bob.schieffer where we previewed our debate coverage - tune into @cbsnews at 9PM EST

On 10 October 2011, she was hired by CBS taking the spot of Scott Pelley to conduct the CBS Evening News and since then she was recognized among Washington's 100 most powerful women.

On the other hand, Scott worked as an editor and also as the correspondent of the magazine called 60 minutes, CBS news.

O'Donnell favorably became a co-anchor on CBS This Morning in the year 2012, as the substitute to Erica Hill.

She had interviewed the former president of United States Barack Obama, former vice president Joe Biden and some of the world's popular figures, including Nobel Peace Prize winner Malala Yousafzai and the Dalai Lama.

Here is an interview of the former president Barack Obama on CBS This Morning by Norah O'Donnell regarding the impact of climate change:

Norah is one of the award-winning journalists. She reserved an Emmy award for her contribution to NBC News' Election Night in 2008.

In addition to it, she also won the Sigma Delta Chi Award on the night of September 11, 2001, for the Breaking News Coverage for "DC In Crisis."

Salary and Net worth of Norah O'Donnell

Norah has an estimated net worth of around $ 8 million contributing in Weekend Today, CBS This Morning and advertising brands like CBC.

It proves her success story in the field of journalism. She gets a very healthy salary every year.

Amazing evening. #time100 might be my favorite dress by @houseofherrera

As per the reports, her salary is estimated to be close to $4,500,000. She owes seven-bedroom, four-level Northwest D.C. home in 2010 and also an apartment on New York's Upper West Side.

The couple has their home in Washington D.C. and also in New York City.

Her husband Geoff is the owner of five restaurants in the Washington area. Geoff works as a vice chairman of the executive board of the Restaurant Association of Metropolitan Washington and also involves himself in more than 150 charities every year.

He also has an estimated net worth of around $8 million.

Norah was born on 23 January 1974 in Washington, D.C., as the daughter of Francis O'Donnell, a physician.

Her parents belong to the Irish descent and her family migrated to San Antonio, Texas when Norah was 3 years of age. 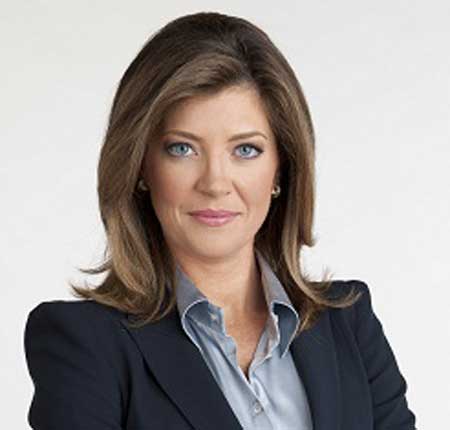 She studied at Douglas MacArthur High School and achieved bachelor's degree in arts in philosophy and a master's degree from Georgetown University in liberal studies.

Well, Norah has won the heart of many fan followers with a great physique. Her talent adds a charm to her beauty and made her very popular on the social networking site. We wish her all the best for the advancement of her career.

As her married life is going so well, we hope the relationship to sustain life long.