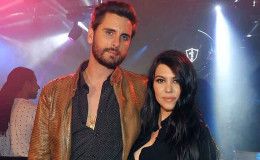 Kourtney Kardashian and Scott Disick shared a unique relationship where they split up and got back together more than once. The couple began dating as early as 2009 before their official break up in 2015.

Kourtney Kardashian and Scott Disick shared a rather peculiar relationship. Though they broke up nearly three years ago, they are still together as they co-parent their three children Mason Dash Disick, 8, Penelope Scotland Disick, 5, Reign Aston Disick, 3. The former couple began dating in 2009 until their official break up in 2015.

How did it all begin? Why was their relationship on and off? What is their current status? We've got everything covered with the entire timeline of the relationship between this complicated couple.

A 24-year-old Scott Disick met a 28-year-old Kourtney Kardashian at a house party. They appeared to strike a connection immediately as they soon started dating afterward. 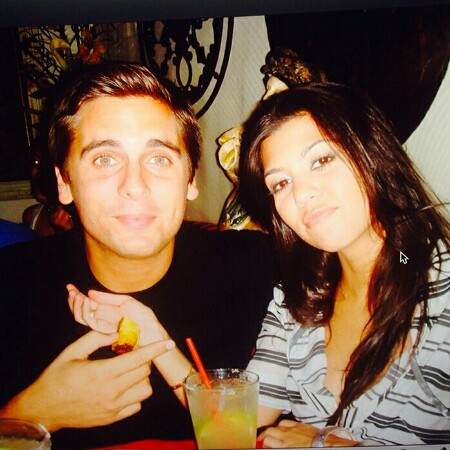 Apparently, they were introduced at the house of film producer Joe Francis in Mexico.

"I introduced Kourtney and Scott at my house in Mexico. Scott came as the guest of a friend of mine, and they met in my master bedroom."

In one of the episodes of Keeping Up With The Kardashians aired in October 2007 starring the Kardashians as well as Scott, the new couple who were not together for too long got a pregnancy scare.

Kourtney took a pregnancy test at home with the help of sister Khloe. Kourtney soon found out that it was a false alarm and she was not pregnant.

Khloe Kardashian and Tristan Thompson Relationship Timeline; Are They Still Together Despite All The Cheating Scandal?

Scott and Kourtney suffered their first break up after Scott got caught texting a stranger labeled 'My Wife' in his phone contacts. Around that time, she was filming her spin-off show 'Kourtney and Kim Take Miami', whilst she was single.

However, the pair got back together soon after. The minor differences were easy to resolve as both came to terms all of it was a bit childish. Everything was back to normal as if nothing happened.

December 2009: The Birth Of The First Child 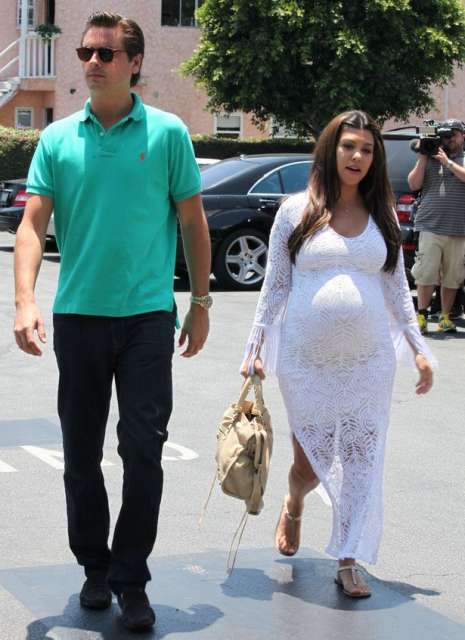 Pregnant Kourtney with her boyfriend Scott spotted in the street
Source: Pulse

Kourtney's subsequent labor post-pregnancy was featured in the show Keeping Up With The Kardashian. The delivery was performed by Beverly Hills doctor Paul Crane.

Scott's excessive drinking habit put the entire relationship in jeopardy. Moreover, Kourtney threatened to take the child away from Scott if he refused to do something about it. 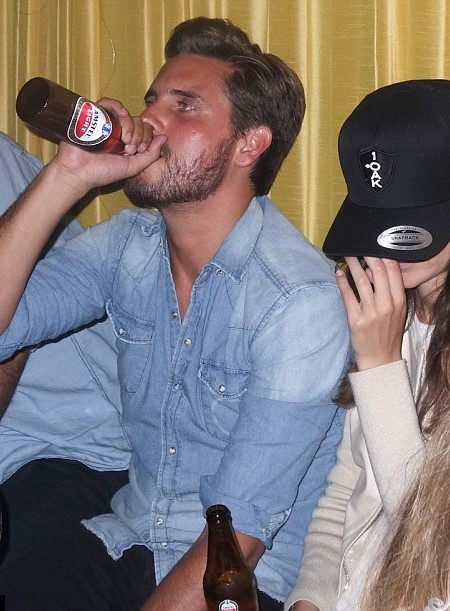 In an episode of Kourtney and Khloe, she said:

"You're not going to be around Mason while you're working on yourself. There's not even a 1% chance ... I can't do this anymore. I love Mason more than I love you. And that's what it is."

This was the biggest hint yet the relationship may not run its full course and they might eventually break up for good.

The first season of KUWTK spin-off, Kim and Kourtney Take New York aired where Scott proposed to Kourtney in the season finale. Unfortunately, he got turned down claiming she was not ready to marry yet, even after being together for four years at the time.

Earlier, Scott shared how it was the right time to make a lifelong commitment to the mother of his son. He even tweeted:

Kourtney disappointed Scott claiming things are so good as they are, a change is unnecessary. She further insisted she is happy with the way things are between the couple. 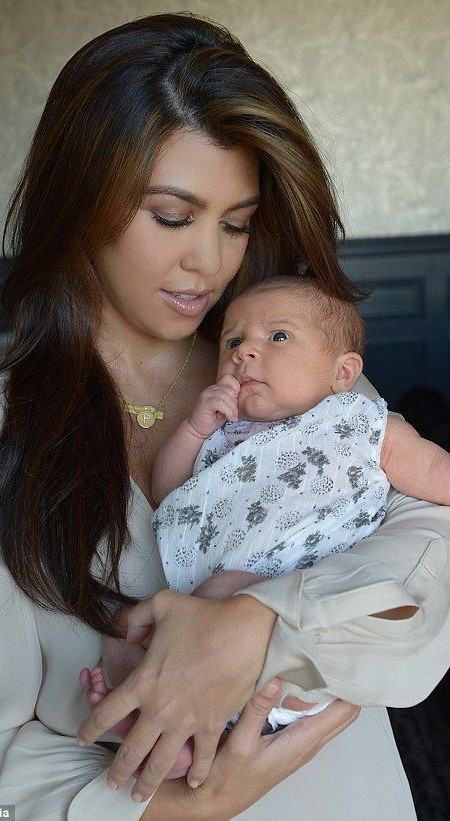 Kourtney expressed her joy in the episode of KUWTK. She said:

"I am excited to have a girl, to have a new experience. I'm really excited for Mason to not have to compete with a little brother!"

The new mom further went on to say her little son Mason's new obsession is babies and he is equally excited to have a baby sister.

A model named Michael Girgenti ridiculously claimed to be Mason's father, which turned out to be utter nonsense as DNA test unsurprisingly proved Scott to be Mason's biological father.

Earlier, Girgenti claimed he slept with Kourtney when she and Scott were on a break in March 2009 and asked to undergo a test. However, lab results from tests proved the allegations false.

Kourtney was saddened to have to address those ridiculous lies. On the other hand, the model Girgenti claimed test could have been fixed.

Tragedy ensued in the Disick family as Scott's mother, Bonnie Disick passed away unexpectedly at the age of 63. She was struggling with a grim illness, though the diagnosis was unclear. The funeral was held at Long Island, New York where he was accompanied by Kourtney.

It couldn't get any more tragic for Scott as he lost his father, Jeff Disick too just 3 months later. Scott subsequently struggled to express his emotions as he dealt with the death of both his parents simultaneously. The news of Scott's parents' demise left the fans completely shocked.

September 2014: Third child On The Way

Kourtney told Scott she's pregnant with their third child. However, Scott was still struggling to move on from the death of his parents and failed to come home.

This caused a slight rift between the pair. For the first time, Scott was not mentally and emotionally prepared to be a father. He had his own issues he was struggling to shake off.

Scott briefly went to rehab, as he was struggling with drug and alcohol abuse which was preventing him from becoming a good father to his kids. Scott wanted to change his life and seemed dedicated to this cause.

However, his entire effort was short-lived as he left the facility early. The actual reasoning was unspecified, but it is believed he couldn't carry the same motivation to perform what he set out to.

December 2014: The Birth Of Their Third Child

The pair's second son and their third child was born named Reign Disick. Kourtney took to Instagram to express her happiness.

Madly in love with my little Reign Aston Disick.

The pair although slightly distant at the time were delighted to welcome a new member to their family.

Scott checked in to a rehab in Costa Rica. He released a statement stating:

"I realize my issues are bigger than me and I'm ready to truly remedy this struggle I continue to battle".

The couple split for the second time as pictures emerged of Scott partying with loads of girls in a yacht, including his ex-girlfriend Chloe Bartoli, which proved to be fatal for their relationship. A source said:

"Kourtney has always taken Scott back and been by his side, but now with three kids, it has gotten old. Kourtney has to do what's best for the kids."

The source accused Scott of running around saying he's single. The final straw was the pictures of him in Monte Carlo whilst he wasn't home after a month-long party binge.

December 2016: Rumours Of The Couple Getting Back Together

According to several outlets, the pair settled their differences and were back together. A source claimed they were giving their relationship a try again as Scott turned his complete focus on winning her back.

Although this was short lived as Scott was caught snuggling up two models two months later, just hours after he was with the entire Kardashians on a holiday. Moreover, a month later Scott admitted to being a sex addict on TV in the season 13 premiere of Keeping Up With The Kardashians.

Kourtney uploaded a picture on Instagram of the former couple in Hawaii with the caption "MOM and DAD back at it again with the co-parenting skills".

MOM and DAD back at it again with the coparenting skills.

It was nice to see the former pair getting along even though they were not really together.

May 2018: Scott Comes To Terms With Kourtney Moving On

After getting hung on his former love and obsessing over making the relationship work, Scott finally accepted she has moved on. Some sources say he left behind his partying persona of the past and is currently in a much healthier place physically and mentally.

The former pair is currently co-parenting their three kids, although there appear to be no signs of them officially getting back together again. That ship seems to have long sailed as both of them seems happy in their current relationship. Kourtney is dating Younes Bendjima and Scott is dating Sofia Richie.

A Relationship With Lots Going On; From Vague Rumors to How It Began; Here's Kylie Jenner And Travis Scott Relationship Timeline

They Dated, They Broke-Up, Yet Together; Inside The Relationship Timeline of Miley Cyrus and Liam Hemsworth; A Love Story Worth Fighting For