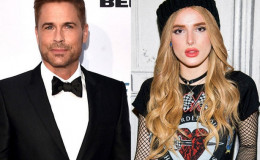 The Brothers & Sisters actor publicly called out young actress Bella Throne about her insensitive and offensive tweet about how the road closures have caused her to miss her "boyfriend's  concert".

The 53-year-old American actor snapshot the picture of the tweet posted by Bella Throne and posted on his Instagram. 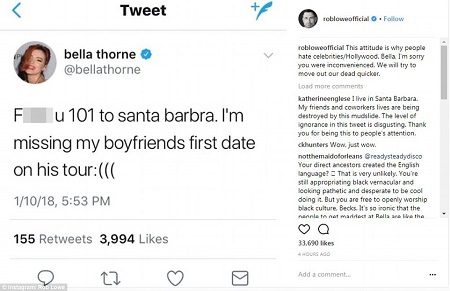 Lowe spoke out for all the victims of mudslides in Santa Barbara and he captioned the post writing,

"This attitude is why people hate celebrities/Hollywood. Bella, I’m sorry you were inconvenienced. We will try to move out our dead quicker.”

The horrifying mudslide that struck California has affected thousands of lives, destroying many homes and police have reported that the death toll has reached 17, including four children so far.

A number of people have also been reported to be missing. Rob shared how devastating few days have been and shared most of his friends and neighbors have gone missing.

Rob's house was not affected by the mud flood but houses of Oprah Winfrey and Jeff Bridges was damaged by it.

This is the street in front of our house. I don’t know anything about our house yet. I’m heartbroken for our community of Montecito. I’m devastated for the families who lost loved ones. I’m grateful to all the rescue workers. Please send love to Montecito.

Ellen DeGeneres and her wife Portia also evacuated from their home in the area. To add more,  celebs like Gwyneth Paltrow suffered huge loss after the mudslides wrecked the grounds of her multimillion-dollar Montecito home and 'wrecking' the beautiful boutique hotel where she married Chris Martin.