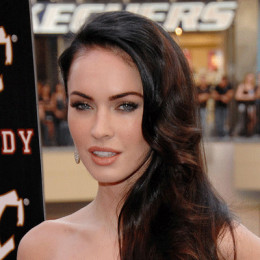 She is a very famous and most recognized glamour personality. She is a model and and actress who is considered as the sex symbol in the fashion world. She is having the successful career. With her beauty and charm, she has captivated the hearts of many people round the globe. She has appeared in the cover of several magazines and several of the Hollywood movies. She has won several of the awards for her performance as well. She holds a promising career in acting as well.

She is a married woman. She has two children from her husband. She had been dating him since long. Prior to her marriage, she was in a relationship with few men for short and long stint but all were unsuccessful. She is living happily with her husband and children. She loves to spend her time with them. She has been rumored to be a lesbian once as well. There are no current rumors available on her at the moment.

An American actress and model Megan Fox was born on May 16, 1986, in Oak Ridge, Tennessee. The beautiful Megan is of white ethnicity and was born to Franklin Thomas Fox and Gloria Darlene.

When Megan Fox was 3-year-old, her parents got divorced and her mother later remarried to Tony Tonachio.

Television actress Megan Fox attended Catholic School for 12 years and later on, dropped out of high school, after winning modeling awards and moved to Loss Angeles.

In 1999, Fox won multiple awards at the American Modeling and Talent Convention. At the age of sixteen, Fox landed her 1st massive break when she was cast as a bratty heiress in the 2001 Olsen twins' comedy film, Holiday in the Sun.

The year 2004 was an enormous one for Megan Fox. She made an appearance on the CBS hit comedy Two and a Half Men, along with Charlie Sheen and Jon Cryer and was a series regular on another show The Help.

Her performance even earned her a Young Artists Award nomination in 2005. Fox additionally started working on films that year when she won the role as Carla Santi, a rival of Lindsay Lohan's personality, in Confessions of a Teenage Drama Queen.

In 2007 Fox landed her biggest break, when she was cast along Shia LaBeouf in the Steven Spielberg's-blockbuster Transformers. Fox was cast as Mikaela Banes in the film. She was even nominated for the 2008 MTV film Award for her breakthrough performance.

In the same year, Fox appeared in the movie How to Lose Friends and Alienate People. The film did well in England due to lead comedian Simon Pegg, however, did not win much of industrial success in the United States.

In 2009, Megan reprised her role as Mikaela Banes in the sequel to the hit movie Transformers' sequel  Transformers: Rise of the Fallen. The sequel was once more a huge box-office success. She also signed on to do the third installment of the franchise, which was tentatively titled Transformers three however later she left the project.

As per the rumors, Fox was free from the film after she created many disparaging remarks about director Michael Bay but both the parties has denied the allegation. Later in 2009, Fox appeared in the horror film Jennifer's Body, which opened to minor success.

Fox began dating actor Brian Austin green in 2004, after meeting him on the set of Hope & Faith; she was eighteen years old, where he was thirty. They got engaged in November 2006. However, their relationship came with the price as in 2009cFox was targeted by a bunch of fashion-motivated criminals referred to her as "The Bling Ring", who robbed Green's home because she was living with him.

Well, nothing matters when one is in love. Fox and green got married on June 24, 2010, during a private ceremony at the Four Seasons Resort on Maui. However, Fox filed for a divorce on August 21, 2015, a couple of days but again by early 2016, the couple was back together.

American actress and model Megan Fox have an estimated net worth of $15 million through movie, television, and modeling.

They got married after several years of relationship. They are living happily together. They have two children.

He is quite young. He is very cute and very lovely. His parents love him very much.

He is the youngest member in his family. He is very young. He is seen often with his parents and older brother.