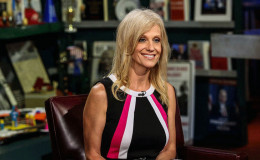 American Republican campaign manager Kellyanne Conway has now become the first woman ever in U.S. history to lead a successful presidential campaign after the victory of Donald Trump on 8 November 2016. She is now very successful and powerful at the same time.

Kellyanne married George T. Conway III in 2001 and has been blessed with four children. Currently, the happy family resides in Alpine, New Jersey.

Despite having a completely busy life while running the presidential campaign for Trump, she always made time for her husband and children.

Conway, 51, is happily married to New York lawyer at Wachtell, Lipton, Rosen & Katz, George T. Conway III. After their marriage, there has not been any kind of rumors about their extra-marital affairs or divorce.

During an interview with Jake Tapper on CNN, she revealed that she was a victim of sexual assault in September 2018.

Conway and anchor Jake Tapper were discussing on sexual assault allegations against Brett M. Kavanaugh. During the interview on "State of the Union", she said,

"I’m a victim of sexual assault."

The Conway's have four children, according to CNN, including twins and live in Alpine, New Jersey. They have three daughters and one son. Kellyanne Conway posted photos of George and their children on social media. Some photos show them enjoying a lot at baseball games.

Also Read: Kellyanne Conway; America's one of the most controversial reporters. See what is she doing these days?

Kellyanne Conway has posted photos of George and their children on social media. Some photos show them enjoying a lot at baseball games.

So they have not kept their personal life secret from the media and happily shares every significant family memories in social media sites including Twitter and Instagram.

The couple has twins whose names are George and Claudia,1 2, and the youngest daughter Baby V who turned 7 this November and one eldest daughter, 16.

She is surely living a happy married life with a loving husband and four beautiful children that make her family complete and content.

Who is Kellyanne Conway Husband?

Kellyanne Conway’s husband George T. Conway III is a New York lawyer who claimed that he belonged to a conservative legal society and was involved in Paula Jones’ lawsuit against Bill Clinton.

George T. Conway III, a graduate of Harvard College and Yale Law School, has also been involved in other prominent lawsuits, including those involving the tobacco industry.

Besides these Kellyanne Conway's Husband's law firm says he also “represented the National Football League in trademark and antitrust litigation against the Dallas Cowboys” and “won an important appeal under the Visual Artists Rights Act of 1990 on behalf of the Swiss installation artist Christoph Büchel in the artist’s highly publicized dispute with the Massachusetts Museum of Contemporary Art".

Kellyanne Elizabeth Conway is the president and CEO of The Polling Company/ WomanTrend and appears regularly as a political commentator on various news channels such as CNN, Fox News, etc.

Conway is a veteran political operative, who's spent the last three decades advising Republicans on how to appeal to female voters.

On July 1, 2016, Donald Trump announced that he hired Kellyanne Conway for a senior advisory position. Considering her as “widely regarded as an expert on female consumers and voters”.

Kellyanne Conway is doing a great job not only as a strategist and Republic Campaign Manager but also as a caring mother and loving wife.

Both Kellyanne and her husband support each other in their career as well as personal life and are already on their way making a better family and happy home.