Top eight Hollywood Celebrities who have had a leaked sex tape

Top eight Hollywood Couples who have had a leaked sex tape. From Kim Kardashian to Jennifer Lopez they all have made sex tapes with their husband or boyfriend

Celebrity Sex Tapes were mainstream back in those days and as fans and media are always prying into their lives, especially on their sexual life and what happens in their bedroom, most celebs took no excuse to leak their sex tapes to the public.

Many have filmed doing NSFW things on purpose while some have been the victim of blackmail by leaking their private videos with partners. Today we bring you a countdown of eight high profile Hollywood celebrities who have become quite famous or quite infamous after featuring in explicit sex tapes.

Teen Mom's star Farrah Abraham made a sex tape with adult-film star, James Dean back in 2013. It was leaked but instead of suing she reportedly earned $1.5 million, paid by Vivid Entertainment.

Farrah Abraham and James Dean together made a sex tape, Source: Wire Image

However, a year later, she regretted the incident stating that the sex tape ruined her reputation. She also revealed that she was abused sexually in the past, confessing that she was drugged and raped before and it affected her emotionally for several years.

It turns out the semi-retired wrestler Hulk Hogan did some performance outside the ring and the audiences were really pleased! Back in 2007, Hulk made a secret sex tape with a woman and she was his friend, Bubba the Love Sponge, a famous radio personality's wife.

What's shocking is that Bubba gave permission to be sexually intimate with his wife and the tape was released in 2016 when Gawker media surfaced the leaked sex tape for the first time. Hulk was married to his ex-wife Linda at that time.

This incident takes us back in 2010. The PlayBoy model, Kendra Wilkinson was involved having sex with an unidentified man who later was identified as her high school boyfriend when she was 18 and the video surfaced on the media acquired by Vivid Entertainment. She was paid $680,000 for the tapes.

Kendra opposed and threatened to sue the company but despite her attempts, it got viral. However, sources reported that she set up a company of her own named Home Run Production LLC from which she tried to sell the sex tapes.

You might be surprised seeing the veteran actor Colin Farrell on the list but the Total Recall actor too did some dirty jobs. He and his model girlfriend, Nicole Narain had recorded sex tape of them that was a 13-minute long video back in 2003.

It leaked in July 2006 and Colin sued the distributor but it was settled personally by the actor.

The Esquire's Sexiest Woman Alive Minka Kelly lands fourth on our countdown and for all her well-wishers it's a bad news. Minka was dating a secret boyfriend and the duo made a sex tape while vacating in New Mexico.

But after the break-up, her boyfriend tried to sell the sex tape to distributors but he couldn't after Minka threatened him.

The singing sensation Jennifer Lopez caught eyes of the media when rumors of her making a sex tape with her first hubby, Ojani Noa, swirled around the web. Sources report that they film their intimate time on the night of their honeymoon and several attempts were made to leak the video.

J.Lo with her first husband Ojani at a red carpet event, Source: Pinterest

It's reported that the sex tape is still in the central depository as ordered by the court. J.Lo blocked the release of the tape in 2009 by filing a lawsuit but it was dismissed in 2011.

It got leaked out of nowhere just three weeks after the premiere of her new reality TV show, The Simple Life back in 2003.

Some even claimed that her show, The Simple Life got more ratings just because of the leaked sex tape. Her boyfriend blamed her for leaking the tapes and filed the lawsuit. However, both settled the matter outside the court after she was awarded $400,000 US.

The reality television queen who has been reigning as the hotshot celeb, Kim Kardashian ultimately tops this chart. Her and then-boyfriend Ray J sex tape was leaked in February 2007 by Vivid Entertainment. 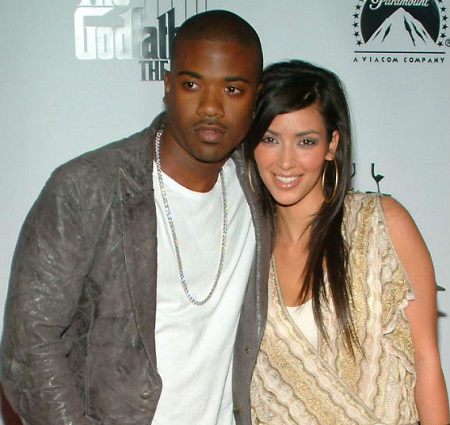 Kardashian filed a lawsuit against the distributor who distributed the video as Kim K Superstar. Eventually, Kim dropped the lawsuit and she compromised after getting a settlement of total $5 million US.

If you enjoyed out today's top 8 section, make sure you follow our page for more interesting and fun articles that are on the way.