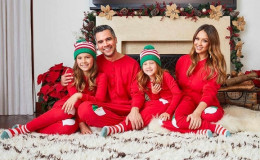 The holiday season is around the corner and for celebrities, it's always amazing to see how they take Christmas every year to the next level. And you know what's more popular than Christmas carols during Christmas? Celebrity Christmas Cards!

Some gave us a sneak peek at their cozy family celebration while some flaunted their glamorous and candid photos and they're flocking Instagram and other social media with all the decorations filling the internet with the festive air.

Today we bring you the top seven celebrity holiday cards we're all just obsessed about!

"I’ve never been adult enough to create holiday cards, but now with two kids the guilt just doubled. I used SimplytoImpress.com for the first time this year. It took 4 lactation cookies, three bottles, two dog treats and the promise of a date night to get this pic. Thank god, ordering it only took minutes. I LOVE how they turned out! Get some!!!"

The gorgeous couple Cash Warren and Jessica Alba took Christmas to a whole new level, dressing up in cozy sweatshirts and pajamas for Christmas.

Cash wrote in the caption,

"Last one where I’ll be the only dude in the photo… I’m having a moment. Merry Christmas Eve! Tried to convince Haven that today was Christmas and Santa forgot about her but she saw right through it. Smart kid."

We wish them a happy new year ahead!

Comedian Kevin Hart and his adorable family with wife Eniko Hart made the movie poster-inspired Christmas card, looking absolutely stunning like they just walked out from the red carpet, featuring the newest member of the Hart family, Kenzo.

Happy Holidays from the “Hart’s”.....it’s beginning to feel a lot like Christmas.... #LiveLoveLaugh #Harts #DopePic

We would totally love to go and watch Hart clans on the big screens.

Christmas is all about warm and fuzzy things but this year the 2 Guns star Mark Wahlberg and his gracious family went for a summer-themed, holiday Christmas card this year.

The whole family, Rhea, Mark and four children sent out their holiday wishes in their bathing suite, poolside.

The Conrads and Tells posted endearing photo of their family captioning,

"We finally got our act together and sent out a Holiday card this year!"

He further added a joke stating, " But we also managed to kill our Christmas tree in 2 weeks..so there's that!"

The card is simple, sweet and stands out as one of the fabulous Christmas cards this year

The Kardashians always entertain us with glitz and glamorous family portrait and although they always fuss around organizing the events, the final outcome of their 2017's Christmas card created quite a buzz in the media.

They opted for a casual white top and denim jeans, casually posing in front of the Christmas tree but Kylie Jenner was missing!!

There's no Christmas card that can beat the Royal Family Christmas Card. The Royals, Prince Williams and Kate Middleton chose a blue theme for their annual card, looking lit! The Kensington Palace shared the royal portrait with caption,

"The Duke and Duchess of Cambridge are pleased to share a new photograph of their family. The image features on Their Royal Highnesses' Christmas card this year."

The Duke and Duchess of Cambridge are pleased to share a new photograph of their family. The image features on Their Royal Highnesses' Christmas card this year. The photograph was taken earlier this year by @ChrisJack_Getty at Kensington Palace. pic.twitter.com/p8jm6zDfl0

It became the most famous celebrity Christmas Card of the year with everyone speculation whether or not the Duchess might soon be welcoming another member soon in the family.