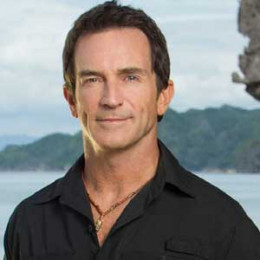 Jeff is best known as the Emmy Award-winning host of the U.S. version of the reality television show "Survivor." He also hosted The Jeff Probst Show, a syndicated daytime talk show produced by CBS Television Distribution. He won the Emmy Award for Outstanding Host for a Reality or Reality-Competition Program in 2009, 2010, and 2011.

Regarding his personal life, he's husband to Lisa Ann Russell and the stepfather of children Ava and Michael.

Jeff Probst is officially a married and divorced man. He's been romantically linked to one of the Survivor: Vanuatu contestant while filming it. Though, it was a matter of public interest the rumor shut down as Probst plunged into another relationship. Who is his present wife? Is He still Married?

Who Is Jeff Probst Currently Married to?

married Lisa Ann Russell, who is a former model on December 5, 2011. Lisa is the second wife of Jeff. He became the stepfather of Russell's two children, son Michael, and daughter Ava from her previous marriage with Mark-Paul Gosselaar.

Later, Probst told that he and his wife share custody of two children with Gosselaar and his second wife.

"Well, they were together almost 20 years. They had a long marriage and they raised these two young kids. They raised them with the kind of love that the kids they see me, and he’s now remarried, his wife, they just see us as two more parents."

He revealed that the kids were in a dilemma with what to call him when he and Russell were dating.

"But when we got married, when this ring went on my finger, Michael looked up and said, ‘dad,’ and I could tell that he knew now that this big thing was official and it was real."

His first wife is Shelley Wright, who is a psychotherapist. They tied the knot in 1996. But, after five years of marital relationship, they divorced in 2001. They have no children together.

This is happening today! #LEGOLANDCA

After, his first divorce with Shelley Wright, he began dating Julie Berry, an American television personality, and producer. Julie and Jeff met for the first time on the set of the reality competition show "Survivor,"  where she was one of the contestants. After, five years of dating they broke up in 2010.

How Rich Is Jeff Probst?

According to Celebrity Net Worth, Probst receives a yearly income of $8 million. He earned big bucks for writing an directing "Finder's Fee".
He purchased a new lavish Lux Studio City Mansion in CA for $5 million.

From 2000, he began hosting popular international reality competition show "Survivor," which has been nominated and won several awards and was the long-running program on CBS,  derived from the Swedish television series Expedition Robinson. From 1998 to 2001, he also hosted the VH1 series Rock & Roll Jeopardy! and was s contributor for the syndicated program Access.

In 2001, Jeff directed and wrote his first feature movie named "Finder's Fee," for which he won the Best Screenplay in Method Fest Independent Film Festival and the film also received positive reviews from critics.

In 2003, he also made a guest appearance in the episode of Space Shost Coast to Coast on Cartoon Network's Adult Swim. In October 2011, he appeared on the sitcom "How I Met Your Mother," episode "The Stinson Missile Crisis."

Jeffrey Lee Probst, known as Jeff Probst is an American game show host and an executive producer born on November 4, 1961, in Wichita, Kansas, the United States to father Jerry and mother Barbara Probst. He grew up in the city of Bellevue in Washington.

In 1979, he graduated from Newport High School, later, he joined Seattle Pacific University and also served at Boeing Motion Picture/Television studio as a producer and narrator for marketing videos.

Jeff first married Shelly Wright, who is a psychotherapist by professional. After 5 years of marriage, they divorced. They don't have any children together.

Jeff married Lisa Ann Russel, a former model. The couple doesn't have any children together but Jeff became stepfather of two children from Lisa's previous marriage.