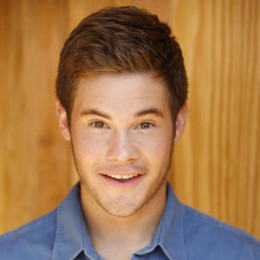 Adam Patrick DeVine, better known as Adam DeVine, is an American actor. He is famous for portraying the role of Bumper in the musical comedy movie, Pitch Perfect and Pitch Perfect 2, and American television mockumentary sitcom Modern Family. He has seen in the movies Neighbours, The Intern, The Final Girls and Mike and Dave Need Wedding Dates. He is also a comedian, singer, voice actor, screenwriter and co-creator of the Central series Workaholics and an American comedy television series, Adam DeVine’s House Party in 2013.

Born on 7th November 1983, Waterloo, Lowa, U.S, Adam DeVine is the son of Dennis and Penny DeVine. He is a sibling brother of Brittani BeVine. He attended Millard South High School in Omaha, in 2002, Nebraska and joined Orange Coast College where he met his now cast member Blake Anderson.

When he was at 11, he was hit by a 42-tonne cement truck while he was crossing the street, resulting in multiple fractures in both legs that required surgeries over three years. After treatment, it took two years for him to learn to walk again.

Later, he moved to Los Angeles and started working as a standup comedian and actor.

Moving to Los Angeles, Adam made friends with Black Anderson, Anders Holm, and Kyle Newacheck, with whom he later formed the sketch-comedy group Mail Order Comedy in 2006. The group together toured live and achieve huge success on websites such as YouTube and Myspace.

The success was followed by his appearance in the Television show, Crossbows & Mustaches, where he portrayed the character of Steve Wolves. He also is the co-created, wrote and produced the show.

In 2007, he made a small role in the TV series Nick Cannon Presents: Short Circuitz and The Minor Accomplishments of Jackie Woodman. The same year, he appeared in his debut American movie, Mama’s Boy, directed by Tim Hamilton.

He played several roles in the TV series but his role Adam DeMamp in the American situation comedy television series Workaholics rose popularity among the viewers and critics. He was nominated for People’s Choice Award and MTV Movie & TV Awards for Best Comedy Performance and Favorite Cable TV actor.

It was one of his successful hit movies which collected $115.4 million in the box office collection. After the success of first part, prequel, Pitch Perfect 2 was released in the year 2015, directed by Elizabeth Banks. The prequel movie also went box office hit collecting $287.5 million. The first part of the movie won him a Teen Choice Award for Choice Movie Villain and a nomination for Choice Movie Breakout.

Moreover, his upcoming flick movies are When We First Met, Magic Camp and Isn’t It Romantic in which he is working hard to collect positive response from his fans.

Currently, Adam is dating Chloe Bridges since February 2015. They first met on the set of The Final Girls, a horror movie, where both of them played the supporting roles. The boyfriend-girlfriend often share their romantic moment on their Instagram account.

Adam is one of the successful American actors who has got a huge career in his near future. He has played over 12 movies and 25 TV drama series at his early age. He has an estimated net worth of $3 million.