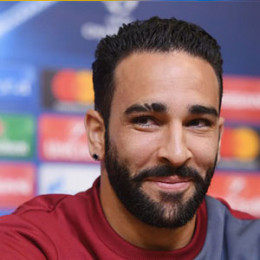 The French football player, Adil Rami, is currently playing for French club Marseille as a central defender wearing the jersey no. 23. Rami is also a member of France national football team since 2010.

Adil Rami was born on 27th December 1985 in Bastia, France, and his horoscope is Capricorn. Moving on to his nationality, Rami is French and belongs to Muslim ethnicity.

Later on, he moved to Frejus, where his mother had worked as a member of the city council. He was raised alongside his two sisters and a brother. When he turned nine years old, Rami started playing football with Etoile Frejus Saint-Raphael, as his hobby. 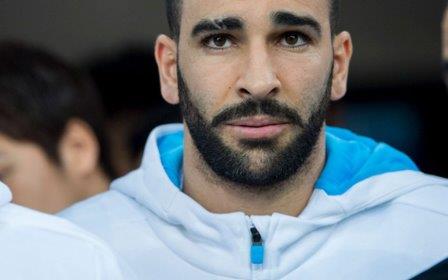 Furthermore, while Rami was training to become a professional football player, he worked for the city which got his family to get concerned about his future. He often had to do odd jobs such as taking care of the maintenance and cleanliness of the city.

Moving onto his career, Adil Rami first made his amateur debut for the club Étoile Fréjus Saint-Raphaël, during the 2003–04 season while Fréjus was playing in the Championnat de France amateur, the fourth division of French football.

He appeared in four matches in the first season of his career. In the 2004–05 season, Rami later appeared in 24 have as Fréjus and finished mid-table.

Throughout his career, Adil has joined a number of clubs. After his time in Étoile Fréjus Saint-Raphaël, he joined Lille for five seasons. From the club, Adil made his UEFA debut on 30th July 2009. Later on 3rd January 2011, Rami moved to the Spanish club Valencia.

Soon after, he joined the Italian club, A.C. Milan. And on 6th January 2014, Rami made his Serie A debut against Atlanta with a 3-0 victory. Later in 2015, Rami joined Sevilla signing a 4-year deal. Soon he moved to the Ligue 1 club Marseille, signing a 4-year contract deal.

The main source of Adil Rami’s earning is through his club's contract, national team salary, endorsement deal, and sponsorships. As of 2018, the football player has an estimated net worth of around $9.90 million.

Currently, he is signed to FC Marseille where he earns a good amount of salary, which is under review but is assumed to be in 6 digit figures. 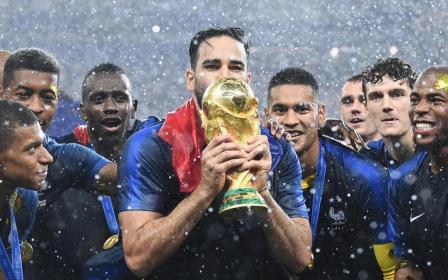 Adil Rami with the FIFA Cup in his hands,
SOURCE: tah-heetch

The current market value of Adil Rami is $6.32 million whereas back in 2012, his market value was $17.68 million. Furthermore, Rami owns a luxurious house in Spain.

Moving on to Rami's personal life, the football player was in a relationship with Canadian actress Pamela Anderson, they started dating in 2017. The couple was once spotted kissing in St. Tropez, where the duo had a cozy dinner at La Gioia restaurant.

When Adil asked to marry her, Pamela instantly said no. Soon after she rejected him, the actress reportedly dumped him. According to her, because of their relationship, he wasn't seeing his twin sons, Zyan Rami and Madi Rami, which she couldn't bear to watch.

She subsequently moved out of his house because she didn't want to become a barrier between him and his twin sons.

He welcomed twins with his ex-girlfriend, lingerie model Sidonie Biemont in the year 2016. He seems to be an active user of social media having more than 925k followers on his Instagram account.

Adil Rami stands at a towering height of 6 feet 3 inches and weighs 88 kilograms. He has black hair and his eyes are dark brown. The most notable feature of Rami is that he has 2 notches in his eyebrows.

One of the twins of Adil and Sidonie he was born in 2016, shortly before his parent's break up.

The second half of the twin is Madi.