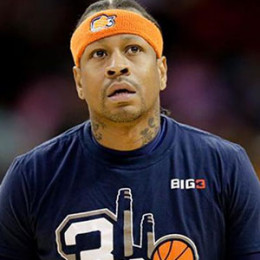 Allen Iverson is a professional basketball player known for showcasing his extraordinary set of skills in the court. He retired from the basketball scene lately but he played for Philadelphia 76ers.

Allen Iverson's estimated net worth of $1 million as of 2019. He summoned his massive wealth through his successful basketball career while playing for Philadelphia 76ers.

MJ: I know you look up to me but I’m going to f*** you up little punk. ME: Yea I do but we on the battlefield tonight Jack!!! #TBT #NahImTalkingShit #TheGoat #MyIdol

Allen was an active part of the NBA making a mark with his extraordinary set of skills as an athlete. His total earnings from his professional basketball career are $155 million excluding endorsements.

As an endorsement deal, he signed a lifetime contract with Reebok back in 2001. He receives $1 million per year as per the contract and will receive a hefty sum of $32 million at the age of 55.

However, the massive wealth of the basketball player is in a dwindling state due to his outstanding debts and reckless lifestyle. His monthly expenses total to $360,000 but his monthly income is only $72,000. He is yet to pay for his divorce settlements to his wife and five children.

Allen Iverson is a single man as of late. He married his childhood sweetheart, Tawanna Turner on August 3, 2001.

The duo crossed each other's path when they were in high school. The couple had two kids before they were married and the other three were born after they exchanged their vows.

His wife filed for divorce in 2012 and the divorce hearings were quite heated. Allen claimed he was broke and couldn't pay the divorce settlements.

He also made an agreement to win his former-wife stating that she would receive all the $32 million that Rebook will provide if he cheats or spends too much. He failed to keep up to his part of the deal so lost the money.

Allen Ezail Iverson was born on June 7, 1975. He was born to a single then 15-year-old mother, Ann Iverson. His father Allen Broughton abandoned his mother after impregnating her.

He attended the Bethel High School located in Hampton, Virginia, United States. He was an active member of the football team and the basketball team and in his junior year of high school. He led both teams in the Virginia state championships.

Ezail was sentenced to a correctional facility for the bowling riots case in 1993. He completed his high school education at Richard Milburn High School, a school for at-risk students. In the High School.

Iverson was spotted by Georgetown University Coach John Thompson. Thompson offered him a full-time scholarship to play for the Georgetown Hoyas basketball team.

He shined in the basketball court and won many respected titles such as the Big East Defensive Player of the Year award and the Big East Rookie of the Year during his time in Georgetown University.

The duo was high school sweethearts and they had a loving relationship before Allen started behaving recklessly with his gambling and alcohol habits.

Tiura Iverson is a famous Youtuber and also the daughter of a famous basketball player.

Isaiah is the second born of his parents and is also following the footsteps of his old man.

Allen II is the third born of the high school sweetheart. He was born after his parents exchanged vows.

Messiah is the forthborn of the duo she has a younger brother as well .

Dream Alijha Iverson is the youngest member of the Iverson family. He is the third son of the family.