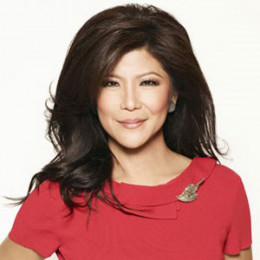 Julie Suzanne Chen, better known as Julie Chen, is an American television personality who works for CBS. She is a host of U.S. version of CBS reality-television show, Big Brother and co-host and the moderator of the CBS daytime show The Talk. Also, she is an anchor of The Early Show on CBS. She was nominated for a precious award, Daytime Emmy Awards for Outstanding Talk Show Host in 2014.

Julie Chen was born on 6th January 1970, to the Chinese immigrant parents David Y. Chen and Wan Ling Chen in Queens, New York City. She grew up in a large family with love and affection from the nine grandmothers whom his grandfather married. She is a sibling sister of Gladys and Victoria.

She attended Junior High School from the Whitestone area of Queens and went to St. Francis Preparatory School in 1987. She passed her degree in broadcasting journalism and English from the University of Southern California, in 1991.

Since college days, Julie started working as an intern at CBS Morning News along with Andy Cohen. There she answered phones and copied faxes for distribution in 1990 and after a decade later she anchored the show.

In 1991, she worked for ABC NewsOne as a front desk for one season. Later, she was promoted and start working as a producer for next three years.

From 1995-1997, she traveled to Dayton, Ohio, where she worked as a news anchor for WDTN-TV. Then she began hosting the new show, Big Brother, however, the first session of the show, she was criticized for her heavily scripted, wooden delivery of the speeches. She even got the nickname of Chenbot.

Later, Julie became a diplomat for the show, The Talk, in 2010 with casts Sharon Osbourne, Aisha Tyler, Sheryl Underwood, Sara Gilbert, Marissa Jaret Winokur, Leah Remini, Holly Robinson Peete and some others. In addition, she guest-starred in the NCIS: Los Angeles episode, In The Line of Duty, where she has portrayed the character of U.S. Ambassador.

For her hard work and dedication, she won a nomination for Daytime Emmy Awards in 2014 for Outstanding Talk Show Host.

Julie married her long-time boyfriend, Leslie Moonves, on 23rd December 2004, with the involvement of some close friend and family members in a private ceremony in Acapulco, Mexico.The husband and wife have a son, Charlie Moonves, born on 24th September 2009.

The couple started dating in 2000. At the time Leslie was married to his wife Nancy Wiesenfeld. On April 22, 2003, Nancy citing irreconcilable differences, filed for a divorce in L.A. Superior Court. The divorce took nearly two years due to disagreement in financial settlement and finally on December 10, 2004, he got an early divorce leaving spousal support and child support to be decided at later date.

Before Leslie, she was in a love relationship with Gary Donahue, a news editor, since 1991. During the period, she used to work for ABC News as a news assistant. The boyfriend-girlfriend dated several years, but unfortunately, they split due to some personal reasons.

Julie has undergone blepharoplasty, a plastic surgical procedure, the goal of which was to make her eye appear larger. According to the sources, she was told that she won’t get a job of an anchor because she is a Chinese. This might be the reason for the surgery.

After one year of her first plastic surgery, it was rumored that she had a second surgery, this time of her nose in 2013. But she denied it and gave some clarification that she looks different than before not because of the surgery rather than of the makeup hacks.

Being a successful personality, she along with her husband has an estimated net worth of $50 million. Her source of income includes journalism, hosting the shows and reporting news.

Julie Chen the second wife of Leslie Moonves, whom she married on 23rd December 2004. Leslie is the president and chief Executive Officer of CBS Corporation. The couple was in a boyfriend-girlfriend relationship since 2000 though he was in a married relationship with Nancy Wiesenfeld. Later, he divorced his first wife on 10th December 2004. From his previous marriage, he has three children: Adam, Michael, and Sara.

Born on 24th September 2009, Charlie Moonves is the one and only son of Julie Chen and Leslie Moonves.