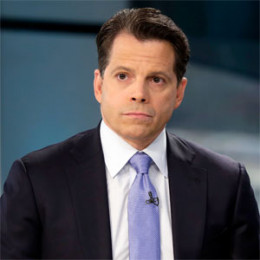 Anthony Scaramucci is an American financier, political figure, and entrepreneur. He worked at the American multinational finance company, "Goldman Sachs” as private wealth management and investment banking equities for several years. Also, he was the founder and co-managing partner of "SkyBridge Capital" and "Oscar Capital Management". Scaramucci earned "Ernst and Young Entrepreneur of the Year Award" in the Financial Services category in 2011. Recently, on July 2017 he was appointed as the White House Communications Director or Assistant to the President for Communication.

Anthony Scaramucci was born on January 6, 1964, in Long Island, New York. He was born in a middle-class family, to the Italian-American parents, Marie DeFeo Scaramucci and Alexander Scaramucci. He has an older brother David Scaramucci and a sister Susan Scaramucci.

Scaramucci graduated with a bachelor's degree in economics from Tufts University in 1986 and received a J.D. (Juris Doctor Degree) from Harvard Law School.

Anthony began his career at Goldman Sachs in Investment Banking division, after he graduated from the law school in 1989. He was fired a year later but again recruited in the company in the Equities division. Later he left Goldman Sachs to start a new hedge fund, Oscar Capital Management.

He founded and worked as the co-managing partner of SkyBridge Capital and Oscar Capital Management. In 2016 SkyBridge Capital was ranked in 85th position in Worth Magazine's Power 100: The 100 Most Powerful People in Global Finance. In 2017 he resigns from his co-management role.

Anthony Scaramucci: Culture of fear inside the White House.

In 2008, he worked as a fundraiser for Barack Obama and after the next election in 2016, he was appointed as President-elect Trump's Presidential Transition Team Executive Committee.

After one year, in 2017 July 21, he was appointed by President Donald Trump as Assistant to President and director of White House Office of Public Liaison and Intergovernmental Affairs.

On July 31, 2017, just 10 days of his recruitment, he was dismissed by President Trump for his undisciplined manner on the recommendation of new chief John Kelly. Aside from working as a political analyst, in 2014 he became a member of Fox Business Network as a contributor. Also, Scaramucci has hosted the financial TV show Wall Street Week in 2016.

He was a "Fake HouseGuest" on Celebrity Big Brother 2. The show that aired on 25th January 2019 revealed that Scaramucci was only pretending to be the house guest but in fact, it was just an illusion for both contestants and viewers.

Though some reported that he is quitting the show early, he told Entertainment Weekly that he "absolutely dod not quit the game".

Anthony Scaramucci is living a luxurious life and has estimated his net worth of $200 million. He has a car Bentley which price starts at $180,195.

In 1995 he founded a SkyBridge Capital and the firm finally uplift the assets $7 billion under the management. Recently in 2017, it was announced that Anthony was selling SkyBridge Capital to a Chinese bank for $11.5 billion. Anthony paid $100k to have SkyBridge logo.

As the advisers to American President, Anthony earns $179,700 per annum. The Golden Sachs alumnus has listed assets worth between $61.6 and $85 million.

For the upcoming teen musical comedy Crazy for the Boys he invested about $100k-$250k. The movie set for 2018 release, is also backed by One Media Corp. From the cable news network Fox Business Network, Anthony earns $88k.

According to the CelebrityNetWorth in 2010, has estimated The Mooch's net worth to be $40million. In 2017 Anthony financial disclosure was leaked to the press. In the disclosure list his liquid assets as being worth $85 million.

Anthony Scaramucci has published three books so far and it has sold millions of copies worldwide. The cost details of the books are given below.

1. Goodbye Gordon Gekko: How to Find Your Fortune Without Losing Your Soul

2. The Little Book of Hedge: What You Need to Know About Hedge Funds but the Managers Won't Tell You

3. Hopping Over the Rabbit Hole: How Entrepreneurs Turn Failure Into Success

Anthony Scaramucci donated $40k to Schneiderman's re-election campaign in 2016.  According to The Daily Beast, Scaramucci rewards $100k for the brief cameo in Oliver Stone's 2010 movie, Wall Street: Money Never Sleeps. The movie has a 6.2 rating on IMDB and earns more than $130 million at the box office.

Anthony Scaramucci was married twice. His first wife was Lisa Miranda with whom he had three children- two sons Anthony Jr. Scaramucci, Alexander Scaramucci, and a daughter Amelia Scaramucci. The couple got divorced after 23 years of marriage in 2011.

Again in July 2014, he got married to Deidre Ball. The couple first dated in 2011. In early 2014, they have their first child together. The pair separated in early 2017 after Ball filed for divorce from Anthony when she was just nine months pregnant with her second child.

She gave birth to her second child and dropped the divorce case on 29 November 2017. Sources confirmed that the pair agreed to work on their relationship and have maintained a stable relationship ever since.

Scaramucci and his wife are podcasting's newest power couple. They launched the new podcast in September 2018.

Their reunion surprised many as Scaramucci was also rumored to be having an affair with Fox News anchor Kimberly Guilfoyle and there were several reports of them taking romantic trips to Rome and other places.

After Scaramucci threatened a student and the school's newspaper with a scandal lawsuit, the self-confident former White House Spokesman, Anthony Scaramucci resigned from counseling board at Tufts University. Because the student of Tufts University students signed an online petition calling for his removal from the Board.

Scaramucci indicted Reince Priebus for being a leaker but in fact, Scaramucci himself said to Ryan Lizza (a CNN political analyst),

"I will fire everyone on the White House communication staff if you didn’t reveal the source of leaked information about who had attended a dinner with Trump."

Subsequently, Trump dismissed him from his role because of his undisciplined behavior in 11 days which is the shortest in history for that position.

Also, back in June 2017, Scaramucci was alleged to have a $10 billion Russian investment fund by three CNN journalists, Thomas Frank, Eric Lichtblau and Lex Haris-all who later resigned after finding out the allegations were false. CNN also formally apologized to Scaramucci.

You May Like Marriedwiki.com/wiki for interesting entertainment and news!!!

He was Lisa Miranda married to Lisa Miranda in 1988, with whom he had two sons Anthony Jr. Scaramucci, Alexander Scaramucci, and a daughter Amelia Scaramucci. The couple got divorced after 23 years of marriage in 2011.

He got married to Deidre Ball. In early 2014, they have their first child together. The couple is separated in early 2017 after Ball filed divorce from Anthony when she was nine months pregnant. She gave birth to her second child and dropped the divorce case on 29 November 2017.