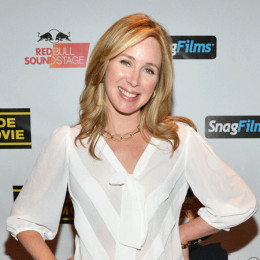 An American television journalist and co-anchorwoman of financial news show Squawk Box which is aired from CNBC. Professionally her father was a geologist. She holds degree in BA in Political Science from Rutgers University. In the start, she worked as editor-in-chief for The Daily Targum. Despite of being undergraduate, she was honored with Times Mirror Fellowship from the Journalism Resources Institute at Rutgers for her dedication in journalism career. Before joining CNBC she worked as reporter for The Wall Street Journal.

Exploring her personal life she has been married twice. Her first marriage was with a programmer. Together they used to live in New Jersey but after a year of their relationship their marriage ended up in divorce. After some months of her divorce, she began to date a Senior Advisor to CNBC’s program Worldwide Exchange and got married too. Together the couple is the proud parents of one baby boy.

Rebecca 'Becky' Quick was born on 18 July 1972 in Minneapolis, Minnesota. She spent her childhood days in Indiana, Ohio, Texas.

She studied at Rutgers University and completed her graduation with a B.A. in Political Science in 1993.

While studying in college, she worked as an editor of the newspaper The DailyTargum.

Quick is currently working as a co-anchor of 'Squawk Box'. She is also the anchor of 'On the Money'.

She joined CNBC in 2001 and worked there for seven years and covered the Wall Street beat for CNBC with Dow Jones.

Quick has an estimated net worth of about $9 million as per Celebrity net worth while it is about $2 million as stated by the Richest.

Becky is living a blissful married life with her husband Matthew Quayle since 2008. Quayle is is working as the CNBC Executive Producer and financial market analyst.

The couple welcomed their first son Kyle Nathaniel Quayle. Five years later, they welcomed their daughter Kyle Noel Quayle in October 2016. Quayle has two daughters named Kimiko and Natalie from his past marriage. The couple is living together with all four kids.

She was previously married to Peter Shay. The couple tied the knot on 22 January 2006 and separated in 2008.

He is a computer programmer. Their marriage relationship only lasted for a year and ended up in divorce.

Professionally he is an executive producer of Squawk Box on CNBC-TV. The couple is living a happy married life together with their one child.

He is the only child of the couple. He was born safe and sound and is very adorable.