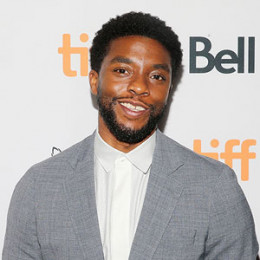 American actor, Chadwick Boseman is best known for his portrayal of the title character in the 2018 blockbuster hit, Black Panther. He is popular for his roles in other movies like 42, Marshall and Get on Up. He also worked in many TV series, Lincoln Heights, Person Unknowns and Draft Day, among others.

Boseman's net worth is $8 million at present. He earns millions of dollars from his acting career. His recent movie, Black Panther was a blockbuster hit at the box office.

Boseman is American as per his nationality and is of African-American ethnic background. He is the son of Carolyn Boseman (nurse) and Leroy Boseman (used to work at a textile factory).

In 1995, Boseman graduated from T.L. Hanna High School. During his junior year, he wrote his first play, Crossroads and staged it after one of his classmates was shot and killed.

In 2000, Boseman graduated with a bachelor degree in fine arts in directing from the Howard University in Washington D.C. While he was in college, his teacher, Phylicia Rashad became his mentor.

Boseman and his friends were accepted for Oxford Mid-Summer Program of the British American Drama Academy in London. His teacher, Rashad helped Boseman and his classmates, raising funds so that they could attend the event.

In 2008, Boseman shifted to Los Angeles to pursue his career in acting.

Chadwick Boseman made his TV debut in 2003 from crime drama TV series, Third Watch by John Wells and Edward Allen Bernero. The same year, Boseman worked in another TV series, All My Children.

In 2008, Boseman acted in his first sports film, The Express by John Davis followed by American family drama series, Lincoln Height. In the series, he shared the screen with Russell Hornsby, Robert Adamson, Rhyon Nicole Brown and Nicki Micheaux, among others.

In 2016, Boseman joined the cast of Marvel Cinematic Universe with his appearance as T'Challa in the blockbuster superhero movie, Captain America: Civil War. T'Challa is the king of the African country, Wakanda, who later becomes the powerful Black Panther.

Boseman starred alongside Daniel Kaluuya, Letitia Wright, Forest Whitaker, and Andy Serkis, among others, in the 2018 blockbuster hit, Black Panther. The film made a good collection at the box office.

Besides, Boseman would be appearing in the upcoming movie, Avengers: Infinity War. He will be starring alongside Robert Downey Jr., Josh Brolin, Mark Ruffalo, and Tom Hiddleston, among others in the film.

Along with acting, Boseman was also involved in writing. His writings were really appreciated by the fans and critics.

One of his play, Deep Azure, was performed at the Congo Square Theater Company in Chicago, which has been nominated for Joseph Jefferson Award for New Work.

Chadwick Boseman's net worth is $8 million, which has hiked after he signed five movies with Marvel Studio. Some of his movies that made a good collection at the box office include,

As per some online sources, Marvel provided him $700k for his first movie, Captain America: Civil War. He earns the salary over million as per the sources.

Chadwick grew up as a Christain. He was baptized in his youth days and was a part of a church choir. He is of West-African descent based on his father DNA.

Boseman unmarried and has no children yet. He is a private person who prefers to hide his dating life and relationships. He is highly focused on his career rather than dating.

Boseman is known by the nickname, Chad. He loves to listen to songs of Bryan Adams and Katy Perry. He enjoys playing golf. He is a food lover and likes to taste varieties of food.

In 2013, Boseman trained baseball for five months with the coaches to prepare his role in 42 as Jackie Robinson.

Below, is the video about Chadwick Boseman's movie, Black Panther: