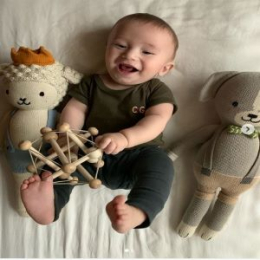 Crew Gaines is the fifth child of the Chip Gaines and Joanna Gaines who were part of the reality show 'Fixer Upper'. He recently celebrated his first birthday in 2019 but is already a social media celebrity all thanks to his parents' stardom.

Who is Crew Gaines? Know more about his Parents, Birth and  Early Life

Crew Gaines is the youngest child of reality TV stars Chip Gaines and Joanna Gaines. He was born on June 21, 2018, in Texas and is already a social media star.

One year ago. What a gift you are to all of us sweet boy

Crew's parents are big social media celebrities and have combined over 14 million followers on their Instagram page. They routinely post pictures of him and each picture always gains thousands of likes. In fact, his parents had to start a signup sheet because their employees were waiting in line to hold him.

However, at first, Joanna was shocked when discovered she was pregnant right before age 40 as the last time she was pregnant was eight years ago. She wrote about her experience of getting pregnant with Crew in a journal and stated:

"I am 40, and pregnancy this time was different. I have always really enjoyed being pregnant — I tend to feel my best during those nine months. This time I felt a little more worn-out than usual"

"It's sweet how, even in the most unpredictable ways, we're given exactly what we need for that exact moment in time," she wrote. "It wasn't something I could have anticipated. But being pregnant and 'forced' to slow down has been a gift."

Crew recently celebrated his first birthday and his mother Joanna shared a sweet post on Instagram which consists of a slideshow of sweet photos of him.

What is Crew Gaines' Net-worth? Know more about his Parent's Net worth, Earning, and House

Crew Gaines is only a year old and his parents have an attractive income. His parents are megamillionaire and are reported to have a combined net worth of $18 million. 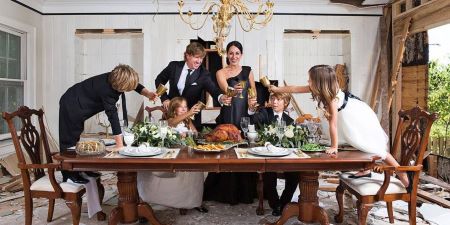 His parents were part of the reality television show Fixer Upper for which they earned $30,000 per episode. Furthermore, they invested their earnings into different business ventures and created Magnolia Brand.

Crew Gaines lives with his family in their home in Waco, Texas with his other four siblings. His oldest brother is Drake Gaines( b.2005), the eldest sister is Ella Rose Gaines (b.2006), elder brother Duke Gaines (b.2009) and Emmie Kay Gaines (b.2010)

Happy Easter from the Farm!

In Crew's mother word, the older siblings are obsessed with their younger brother and help her in taking care of him. In fact, the children though coming from a millionaire family are humble and participate in housework and sometimes in their parents' work too.