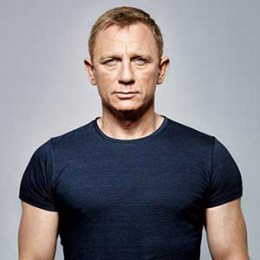 Daniel is a British actor who has amazed the world with his acting. Daniel is famous for his role in James Bond 007 sequels Casino Royale and Skyfall. The sixth actor to play the role of James Bond, Daniel made his mark with his exceptional performance as 007.

Daniel (b. 2, March 1968) was raised on the Wirral Peninsula with his elder sister Lea Craig. He attended primary school in Frodsham and Hoylake. Also, he has two brothers Harry Craig and Philip Blond.

Craig has distant French Huguenot ancestry. His parent borrowed Craig's middle name "Wroughton " from his great-great-grandmother, Grace Matilda Wroughton. His parents got divorced in 1972, and his mother moved to Liverpool.

He was trained at National Youth Theater and graduated from the Guildhall School of Music and Drama in 1991.

Craig began acting in school play since six years of age. His interest was encouraged by visits to the Liverpool Everyman Theatre. During his struggle, he was connected with NYT where he performed and toured to Valencia, Spain, and many other places.

He made film debut in 1992 with the film Power of One. His career continued on television, notably BBC2 serial 'Our Friends in the North' in 1996.

He played supporting roles in Lara Croft: Tomb Raider and Road to Perdition, and in 2004 he got a leading role in Layer Cake. In 2005 he got the role to portray as James Bond and hence he became a famous face in the world. He is the first blonde actor to be chosen for the role of James Bond,

However, after being married for two years, Daniel and Fiona divorced in 1994.

After his divorce with Fiona, he dated two beautiful women. One of them is not so popular actress from Germany Heike Makatsch whom he dated for seven years, and they broke up in 2001. Craig also had an affair with Kate Moss in 2004. In 2005 he was linked up with Sienna Miller.

From 2007 to 2010 he dated producer Satsuki Mitchell and they even got engaged.

Craig then dated actress Rachel Weisz. They started dating in 2010 when they starred opposite in movie Dream House. These two secretly married on 22 June 2011.

The couple doesn't have any children till now but has a son named Henry Chance Aronofsky, from former fiance Darren Aronofsky.

Craig and Weisz welcomed their first child together; a daughter on 1st September 2018. They first revealed about the pregnancy in April 2019. She said,

"Daniel and I are so happy. We’re going to have a little human. We can’t wait to meet him or her. It’s all such a mystery."

She appeared on the Gotham Awards 2018 red carpet in November. The new mother looked stunning.

The couple is pretty protective about their personal affair so, they barely reveal private stuff on social media.

The net worth of Daniel Craig is $95 million. The handsome earned worldwide recognition through the James Bond franchise which increased his fame as well as his salary. He in 2008 bought an apartment in Primrose Hill near Regent Park, London for £4 million pound

In 1992, Craig married actress Fiona London, they have a daughter but the marriage couldn't last long and ended at 1994.He has said that he was too young to handle the marriage and the only reason for divorce was his immaturity.

After many affairs and many breakups, he then dated Actress Rachel Weisz and on 22 June 2011, the lovebirds tied the knot.

Elle is a daughter of Daniel from his first marriage with Scottish actress Fiona Loudon.Elle and Daniel are pretty close to each other. She is a blonde and is pretty tall. Ella has tried her hand in acting.She has worked in movies like Memory’s Paradigm, Texas Road, and Nara

Henry is the stepson of Daniel Craig. Henry is the son of Rachel Weisz and her previous husband Darren Aronofsky.