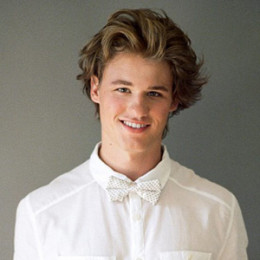 Dylan Playfair is a Canadian actor who is popular as Knox in the series Some Assembly Required. Playfair grew up playing hockey with his brothers and his father being a hockey coach inspired him more to become a pro in the game. However, he eventually pursued an acting career.

Dylan Playfair was born on June 19, 1992. He is from Fort St. James, Canada. His mother Roxanne Playfair was an entrepreneur whereas his father Jim Playfair was an ice hockey coach. He grew up along with his younger siblings Jackson and Austyn.

Playfair worked on several sawmills and on his cousin's farm when he was young. He had a keen interest in hockey as he grew up playing it along with his brothers. He also played Jr. A hockey in the BHCL for the Merritt Centennials.

He first wanted to be a professional hockey player but inspired by Taylor Kitsch he pursued acting as a career. He went to Vancouver Acting School for his graduation.

Dylan Playfair made his acting debut with a sports movie Mr. Hockey: Gordie Howe Story in 2013. He garnered the critical acclamation for his performance in Letterkenny, Descendants 2, Haters Back Off and Travelers.

In 2014, he starred in the comedy series Some Assembly Required followed by short movie Never Steady, Never Still in 2015.

Playfair is currently dating a gorgeous girlfriend and the couple flaunts their relationship openly via social media. He is also a career oriented person, fully focused on uplifting his career.

Dylan Playfair enjoying a vacation with his girlfriend Jen Araki.

The star celebrated Valentine's Day 2019 with his model girlfriend Jen Araki and shared an image of the two via Instagram post.

Happy Valentines Day to my love @jenaraki She posted the same images earlier today... because she’s prepared... and I’m notI love you thanks @austynplayfair for capturing us smooching on the swing

There was a wide range of rumors of him dating actress Daniella Bozzetto. They were also seen spending quality time together which further raised questions about Bozzetto being his girlfriend. However, both the parties have remained silent on this topic.

As an incredible actor, director and producer Playfair earn a lucrative amount from his career. His lavish lifestyle is proof of his net worth which is undoubtedly in millions.