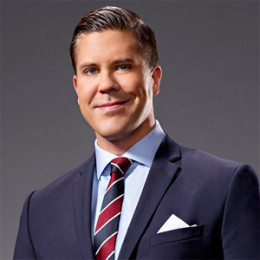 Swedish real estate broker, Fredrik Eklund is known for starring on the Bravo TV series, Million Dollar Listing New York. Debuting in 2004, he appeared in many pornography movies. He is a reality star, former IT entrepreneur, and a non-fiction writer. He is openly gay, married and has twins via surrogacy.

Fredrik Eklund, born on 26th April 1977 is Swedish by nationality and belongs to Caucasian ethnicity. He was born in Stockholm, Sweden under the birth sign Taurus. He is the son born to Klas Eklund (senior economist at Swedish Bank) and Jannika Wenke.

His parents raised him with his brother, Sigge Eklund. His paternal grandparents, Bengt Eklund and Fylgia Zadig, were Swedish-Danish-Irish- Russian actors.

Eklund studied at Edina High School in Edina, Minnesota, where he had his first American life experience as a foreign exchange student. He attended Stockholm School of Economics but never graduated.

At the initial phase of his career, Eklund worked for Finanstidningen, a financial newspaper. He created his own internet company with more than 45 employees at the age of 23. He also worked in the investment bank SEB in London, Singapore, Tokyo, and Stockholm. Later, he branched to New York City as well.

Fredrik Eklund started his career in 2004. He appeared in many pornographic movies under the pseudonym Tag Eriksson. Eklund passed a statement in an interview with  Out Magazine,

‘’ It was only a week of my life, accumulated, it was spread out over a few months, so it was a very short period of my life.''

Eklund also stated that he is very proud of his identity and has no regret of what he does and his past involvement in pornography movies has never affected his career.

Fredrik Eklund is involved in real estate business as well. He has closed more than five billion dollars worth deal in the residential real estate. He became the Managing Director of CORE Group Marketing at the New York City real estate firm alongside his partner Jon Gomes.

Eklund is Managing Director at Prudential Douglas Elliman. The company is the largest real estate brokerage on the East Coast that employs more than 7,000 agents and has 110 offices in New York City.

In 2009, Eklund became the founder and chairman of the board of Eklund Stockholm New York in Sweden. The company is Scandinavia's most high-end residential real estate brokerage with 50 employees and $1 billion in closed sales in 2014.

Working there he sold many apartments to several popular faces. He sold an apartment to Cameron Diaz in February 2008, John Legend in August 2009, and Daniel Craig in July 2010. He sold a mango farm to Patience Acheampong in 2014.

Eklund was featured on the front page of The Sunday Style by The New York Times in November 2010 where he announced that he would be starring in a reality show for Bravo.

Eklund featured in Bravo's American reality TV series, Million Dollar Listing New York. He is one of the three brokers in the New York to star in the show, he appeared alongside Ryan Serhant, Steve Gold, Michael Lorber and Luis D. Ortiz. The show was released on March 7, 2012, and currently is in its sixth season.

Fredrik Eklund is openly gay. He is married and has two children. He tied the knot with artist Derek Kaplan on 9th February 2013. The wedding ceremony took place on Little Palm Island in the Florida Keys. The couple dated for months before getting married.

The couple lived in New York with their dogs; Mouse and Fritzy till 2016, then they moved to a mansion in Roxbury, Connecticut which Eklund purchased They attempted to have children via surrogacy, but the biological mother suffered a miscarriage.

Eklund and his partner welcomed twins on 29th November 2017. They had twins via surrogacy; a son, Fredrik Eklund Jr. and a daughter, Milla Eklund. They even posted a picture on Instagram with their babies with a caption,

‘’Happiest moment of my life. Welcome, Fredrick and Milla to the world.’’

Kaplan also had a son named Kai from his past relationship. He donated his sperm to a lesbian couple who he met in London seven years ago. His son Kai also lives with him and Fredrik.

Eklund has earned in millions as a real estate broker. In 2014, he closed the sale of $1 billion as the founder of Eklund Stockholm. He also earned $10.87 each from his published book, The Sell: The Secret of Selling Anything to Anyone.

In 2015, Eklund bought a mansion in Connecticut worth $3.5 million. The mansion covers 8.26 acres, including a freshly renovated kitchen, a screening room, a wet bar, as well as four bedrooms and four bathrooms.

Eklund later bought a penthouse worth $4.6 million. He also owns a Range Rover that worth $85,650.

Milla Eklund is the only daughter of Fredrik Eklund and Derek Kaplan who was born on 29th November 2017 via surrogacy.