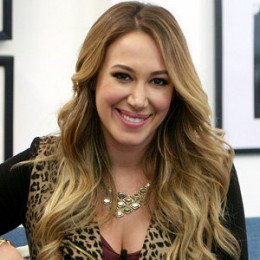 An American actress as well as a songwriter, film producer, businesswoman, film producer, writer, singer, and television host, Haylie Duff is currently engaged with Matt Rosenberg since 2014. She was born to parents of Susan Colleen Duff and Robert Duff. Haylie Duff started her acting career as an offshoot of her early dance training. She has appeared as Sandy Jameson in the television series 7th Heaven, as Summer Wheatley in Napoleon Dynamite, and as Annie Nelson in the made-for-television films, Love Takes Wing.

Haylie Duff was born as Haylie Katherine Duff on 19th February 1985 in Houston, Texas, the U.S. Her birth name is. Haylie has a younger sister named Hilary Duff who is an actress and singer.

Haylie's father Robert Duff is a business owner and her mother Susan Colleen Duff is a film producer and serves as a manager to her younger daughter. As a girl, Haylie trained for dance and also was a ballet performer. Her schooling information is not known. However, Duff has visited online courses of Harvard University.

Haylie made her acting debut in 1998 with the direct-to-video supernatural children's film Addams Family Reunion. She is best known for playing the role of Sandy Jameson in the television series 7th Heaven, Amy Sanders on Lizzie McGuire, Summer Wheatley in Napoleon Dynamite, and Annie Nelson in the made-for-television films Love Takes Wing along with its sequel Love Finds a Home (2009).

Haylie Duff is engaged to Matt Rosenberg since April 2014. They dated for a year and a half prior to their engagement. The couple shares two children. They welcomed their first daughter, Ryan Ava Erhard Rosenberg, on May 11, 2015.

On January 5, 2018, Duff announced via her Instagram account that she and Rosenberg were expecting their second child. A month later, she revealed she was having another girl. She gave birth to their second daughter, Lulu Gray Rosenberg, on June 5, 2018.

Speaking about her wedding plans and when she intends to get married, Haylie said:

"We talk about it and think, 'Maybe now we’re ready to do it' and then life happens and toddler happens. We feel married already and it hasn’t become something that both of us are gung-ho about. Maybe after the craziness of a new baby dies down we’ll be ready to talk about it again."

Haylie Duff has an estimated net worth of $3 million. Her source of income includes her salary and earnings from her career as an actress, TV Presenter, film producer and businesswoman.

Haylie's Toluca house is worth $1.75 million. It has its own Swimming Pool, Jacuzzi, Sauna, Home Cinema, and Home Office. Moreover, she owns a GL car manufactured by Mercedes worth $60,000.

The couple welcomed their first child named Ryan Ava Erhard who was born in 2015.