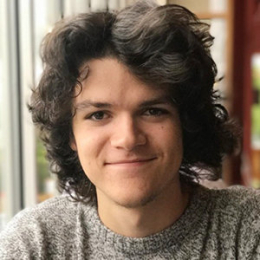 Reality star Jacob Roloff is best known for starring in the TLC shows, 'Little People, Big World' with his dwarf parents. Jacob came to limelight just at the tender age of nine.

Jacob Roloff is engaged to his longterm girlfriend Isabel Sofia. As the couple is of very secretive in nature regarding their love life, they announced their engagement only in 2018, though they were engaged in 2017.

...we got ENGAGED! It happened in Iceland on the frozen pond, Tjörnin, late on Christmas So much love for this beautiful soul @izzysofia_ . Here’s to many more Christmas’, you n me.

Well, the pair first met during their high school but did not start to date immediately. Moreover, their story started with a simple friendship which then turned into best friends and finally turned into an inseparable love bond. The couple then started to spend almost every single day and night together enjoying one another's company.

After three long years of dating, the lovebirds went on a trip to Iceland on the occasion of their anniversary where Jacob finally proposed his love, Isabel. Jacob got down on one knee in the middle of the frozen lake with a beautiful ring. However, Jacob's mother, Amy Roloff threw an engagement party for the newly engaged only in 2018.

Jacob and Isabel moreover have already finalized their wedding to be held on September 7, 2019. Meanwhile, the pair also disclosed their wedding ceremony would not be broadcasted in the TLC show, Little People, Big World unlike their two brothers, Jeremy Roloff and Zachary Roloff.

After Isabel shared pictures from their engagement party over the weekend, many rumors aroused speculating Rock's pregnancy. Also, many fans expected to see the children of the youngest Roloff.

On Sunday, we had an engagement party and it was a wonderful day full of loved ones. We are so incredibly blessed to be walking into this season of life with so many amazing people by our side and endless support. My heart wanted to burst all weekend and I cried more than once. Thank you to those who came, celebrated, and shared your hearts with us on this special day. We love you all so much To my fiancé, I just can't wait to marry you. #rockandroloffwedding2019 #morephotostocome

Isabel immediately took to her Instagram Stories to shut down the rumor mill stating that it was the result of overeating and she was not pregnant. 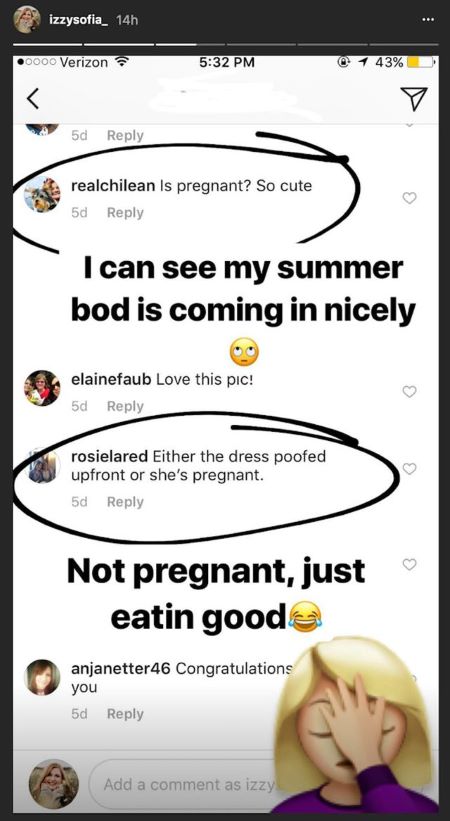 Isabel posted a story shutting the rumor of her pregnancy.
SOURCE: Good housekeeping

Jacob along with his father's business partner Mike Detjen got injured in a horrific accident involving a trebuchet, a medieval catapult, which was used to promote the Roloff's Farm. The family frequently used a trebuchet on the family farm during pumpkin season to launch pumpkins as part of a promotion.

Jacob further underwent an important surgery to remove a small piece of his skull which had pushed into his brain in Portland’s Legacy Emanuel Medical Center. Moreover, the surgery helped relieve swelling in his head. He recovered from their injuries and were released from the hospital just after a few days.

Roloff caught heat from fans after he spoke out about race and white privilege. Moreover, the former reality star took to Instagram on June 9 while "headed to Northern California to visit Izzy's brother, Nico,” when he shared a post detailing his interaction with a police offer.

Headed to Northern California to visit izzys brother Nico. Thought this would be a better place than stories. On the way out of town at a four way stop, I went before a cop, and as I was passing he yelled, “your seatbelt fell off” and did not pursue me to give me a ticket or to even make sure I heeded his warning. And as I drove for the next few minutes I felt and thought a lot of things, but one persists: I just benefitted from white privilege. I couldn’t really stop it, other than by demanding I receive a ticket, which would not impact the root of this in any way. So here I am, in California now, with no ticket and still alive. Because if the same thing happened to a person of color the outcome could have been very different considering the abuses of power that people of color are FORCED to be hyper aware of. (Even if you are familiar, refresh yourself on the tragic case of Sandra Bland.) This is all to say that a person of color’s extrajudicial execution will never be justified by the breaking of law, and it is never even about that. Right there I broke the law, and he ignored me. I think, as a white person, you are being intellectually dishonest if you insist there is not a disparity in how we are treated by the police. Try to educate whoever you can, and always be aware. EDIT: Leaving the original post for posterity, I might add this to further explain the use of ‘privilege’: driving away from the cop it was evident that I had just benefitted from the privilege, if nothing else, to not feel fear (or existential worry). I knew that the MOST that would happen to me was a ticket. For people of color that is not so sure of a thing. And the fear does not come from knowing you broke a law and that consequences are coming, often people of color are harassed for as little as their existence. And from that harassment their brothers, mothers, fathers, and sisters are killed. And from that experience, their children must be taught of that danger, and even then, knowing their rights and acting perfectly, they are still harassed. And so it is their fear, and WHY they feel that way, that we should be aware of.

“for people of color that is not so sure of a thing, often people of color are harassed for as little as their existence. And from that harassment, their brothers, mothers, fathers, and sisters are killed.”

The post proved to be controversial among some of Roloff’s 255,000 followers, who slammed Roloff for making an “assumption” about the officer’s intentions and for bringing race it into” it.

How Much Is The Net Worth Of Jacob Roloff? Know About His Salary, Earnings

Jacob currently amasses the net worth of $300,000. He garnered this wealth from his career as a reality television star. Moreover, he was previously a main cast member on Little People, Big World, which focuses on the dwarfism in his family.

Jacob eventually left the show in its ninth season as he never liked the fact that he was on a reality show, especially from the tender age of nine. Meanwhile, Jacob is focused on his career as a writer which surely helps him to earn good stacks.

Watch: Jacob Roloff talks about being a big person with little-people parents.

Roloff moreover published two books, "Verbing" and "Out to See" which offer insight into his time in front of the cameras, and how his family coped when the lights were off. This ultimately helps him to gather more fortune. 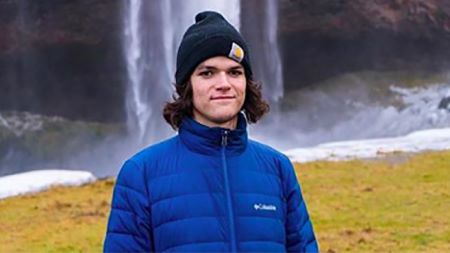