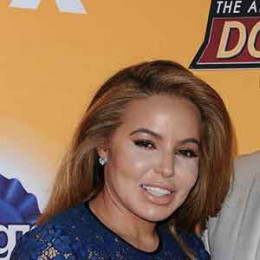 Former wardrobe consultant, Jahira Dar rose to fame after she started dating one of the best dog trainers, Cesar Millan. The couple started dating soon after Millan divorced his first wife. Dar entered into Millan's life when he was devasted from the divorce. The girlfriend-boyfriend couple even engaged after dating for years.

Early Life and Career Of Jahira Dar; Ethnicity and Wiki-Bio

Jahira Dar was born on 1st February 1985 in the United States. As per nationality, she is Dominican and belongs to White European ethnicity/race. Not much information about her early life is revealed in the media.

Moreover, Dar worked as a wardrobe consultant and a stylist. After she started her relationship with her current boyfriend, Cesar Millan, she left her profession and started working with Cesar.

Regarding her partner Millan, he is a popular Mexican-America dog behaviorist with more than 25 years of experience. He is also popular for his appearance in the TV series, Dog Whisperer with Cesar Milan.

As Jahira Dar already left her career so, her net worth is unclear. Whereas, her partner's net worth is around $25 million. Dar's husband to be making an impressive amount from his dog behaviorist profession. He is one of the best dog trainers.

Millan also wrote several books from where he collects a good amount. Here is the list of his books:

Jahira Dar and Cesar Millan are together for a long period of time. The couple started their relationship in 2010 and henceforth are inseparable. After dating for almost 6 years, Dar got engaged to her boyfriend turned fiance, Millan.

Similarly, Jahira announced the engagement via Instagram. She posted a picture of them where Millan kissed her hand showing the giant engagement ring.

As per some sources, Millan proposed Dar after the dinner date in Greece.

Check out the video, where Millan told about his relationship with Dar:

Previously, Cesar married his first wife, Ilusion Millan but divorced soon in 2010. When he was in such condition, Dar came to his life and the rest we all know.

Talking about her importance in his life, Cesar stated,

''Jahira came into my life at just the right time. She was instrumental in helping me rebuild my life and my family after my divorce and break from the Dog Whisperer television show.''

Besides, Cesar and Dar might get married soon but has not confirmed anything yet. Talking about her height, she stands at a small height of 1.56 meters, whereas her boyfriend turned fiance, Cesar stands at height of 1.65 meters.