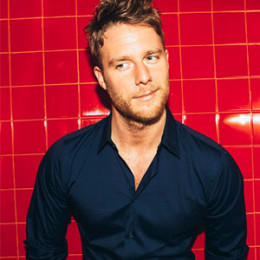 What is the Relationship status of Jake McDorman? Is he dating Someone? Know about his Personal Life

Jake McDorman is currently in a relationship with the famous model and actress Analeigh Tipton. McDorman met the love of his life on the set of Manhattan's Love Story. Therefore, after seeing one another for few months, they fell in love and turned the reel life love story into real one.

The duo began kindling romance since 2014 and since then they never looke back. Jack, as well as Analeigh is in a serious relationship and there won't be a wonder if the pair share wedding vows in the coming years. Tipton is two years younger than her beau.

Happy Birthday, @analeighctipton I could dance all night...

The duo started dating in September 2014 after being in the friend zone for a long time. They seem to share a good bond as they are never part of any controversies about their dating life.

Here's one of the recent Instagram posts of the star:

Well, looking at the above image, it's pretty so sure that everything between McDorman and his girlfriend is going on a smooth pace. Will, they get married anytime soon?

The most interesting part of the story between Jake and Analeigh is that Analeigh was in a dating relationship with her ex-boyfriend, Aaron McManus while she and Jake became friends. Moreover, Analeigh even decided to share the wedding vows as she already engaged with her ex-partner in 2013.

Jake is out of any rumors regarding his past relationships and is believed to have the clean sheet for dating anyone except Analeigh. The actor is focused on his career and is enjoying his life with his girlfriend and mom in Los Angeles.

What is the Net Worth of the Famous actor Jake McDorman?

Jake McDorman holds an estimated net worth of $2 million and it's all because of his acting business. Moreover, he is believed to have a salary of $50.88 per hour, however, it depends on the film and it's budget that how much he earns.

The Hollywood actor first debuted in television starring in the Fox sitcom series Quintuplets(2004-2005) in 2004. Later, he made a guest appearance on House, CSI: Miami and Cold Case. Similarly, he worked in many television series including the famous ABC Family teen drama series named Greek from 2007-2011.

The American actor also tried his luck in the film industry and made debut in the 2005 thriller film Echoes of Innocence. Next, he appeared in many films like Aquamarine, Bring It On: All or Nothing, and Live Free or Die Hard. Furthermore, he worked in various movies and ended up working with many actors like  Laura Prepon and  Sarah Hyland.

Jake owns a pretty amazing house in Ireland which he once posted in his Instagram account. The average price of a house in Ireland is $257,291.  Moreover, he also owns a couple of cars and a pet dog and cat named Burrow & Bean.