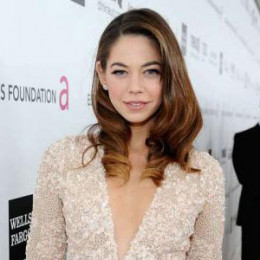 Model turned actress, Analeigh Tipton rose to fame after participating in the reality TV series, "American's Next Top Model" where she placed 2nd runner-up. She has been active in the show business since 2008.

Analeigh Tipton was born Analeigh Christian Tipton on November 9, 1988, in Minneapolis, Minnesota, the US to Poppa Tipton. She is American and belongs to the White-American ethnicity. She started ice skating when she was just two and a half years.

Also, Tipton was only 8 when she moved to Sacramento, California with her family where she was raised along with her elder sister, Whitney Tipton. She attended Placerville, California and learned about her passion for ice skating.

Tipton left skating at the age of 16 but continued to skate in charity ice shows. She graduated from Marymount College, Palos Verdes.

Analeigh Tipton started her career as a ramp model. She was signed to I Model & Talent in Los Angeles and walked in Los Angeles Fashion Week Fall 2008 for the designer, Kelly Nishimoto. Then she participated in America's Next Top Model Season 11 but the journey wasn't easy for her because, at the beginning of the show, she once encountered sex traffickers posing as modeling agents.

Tipton almost got sold to the Saudi Arabian prince but she managed to get out of it before finalizing the deal. Soon after the show, she was signed by Ford Models in Los Angeles and Abrams Artists Agency, in both the commercial and theatrical divisions.

She has featured in several magazines like Marie Clarie, Vogue, Maxim. She also did campaigns for clothing brands like Forever 21 and Guess. She modeled for many runways including Geren Ford's pre-fall 2010 collection, Mercedes-Benz Fall Fashion Show, Ticket Fashion Show, Nick Verreos Line.

Analeigh Tipton made her way to acting in 2008 as a guest star on an episode of popular TV series, The Big Bang Theory. She made her acting debut with TV series, Hung in 2011. The same year, she debuted in films with The Green Hornet but her appearances go uncredited.

She got her first major role in hit rom-com Crazy, Stupid, Love alongside A-list actors including Ryan Gosling, Steve Carell, Emma Stone, Julianne Moore and so on. where she portrayed the role of a teenage babysitter, who falls in love with a much older man. The movie was commercially successful. Then she appeared in numbers of movies including Damsels in Distress, Warm Bodies, Lucy, Mississippi Grind, Between Us, Viral, Golden Exits, All Nighters, The Long Home.

Analeigh Tipton considered as one of the rising Hollywood stars. She has earned a quite impressive name and fame from a short span of her career. Her estimated net worth is $1.5 million but no official confirmation has come about it.

Analeigh Tipton is in a romantic relationship with her longtime actor boyfriend, Jake McDorman. The duo first encountered each other on the set of Manhattan Love Story and after few dates, they fell in love and transformed their reel love story into real ones. They are together since 2014 and ever since they share a healthy relationship.

Prior, McDorman, Tipton dated film producer Aaron McManus and got engaged in 2013 after six years of relationship. However, the couple failed to handle their love life and called off their engagement in 2014.

Tipton has a keen interest in writing and she often used her spare time to write a zombie movie.

Check out the Interview of Analeigh Tipton where she talked  about her career in modeling, acting and some of her favorite moments on set at chat show, After Dark,