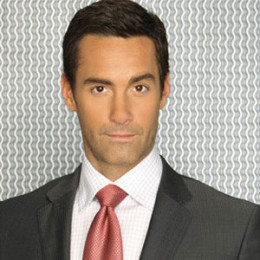 James H. Harrington III is professionally known as Jay Harrington, is an American actor. He gained overnight popularity after playing the character of Ted Margaret Crisp on the ABC sitcom Better Off Ted. He portrayed the role of Dr. Ron McCready on the drama, Desperate Housewives.

The American actor Jay Harrington was born on November 15, 1971, in Wellesley, Massachusetts to Judy and Terry Harrington. He was brought up with his two brothers, actor Adam and Matt.

As a child, Jay’s family spent summers on Cape Cod up the road from The Harwich Junior Theater. He studied at Wellesley High School. After that, he attended the Syracuse University.

Jay Harrington has appeared as a Dr. Simon on the WB drama Summerland, Steve on NBC’s version of Coupling, and FBI Special Agent Paul Ryan on Fox’s short-lived The Inside. Moreover, he also featured as a recurring character on the police drama series The Division.

He played the character of Dr. Ron McCready on the series Desperate Housewives along with Teri Hatcher, Felicity Huffman, Marcia Cross, and Nicollette Sheridan.

But Jay is mostly known for his title role in the ABC series Better Off Ted, where he played from 2009 to 2010

Other than that, Harrington also featured in films including American Reunion, Whatever It Takes, Anywhere but Here and many others.

The pair started began dating in early 2014. Till now the pair has no children. True, the pair also doesn’t often go on exotic vacations, but they attend big party events together.

Besides, Jay is also an avid sports fan who plays in Entertainment League which is a private celebrity basketball league.

Jay has appeared in several popular movies including Pacific Blue, The Pretender, and Anywhere But Here. His net worth is estimated to be $1 million.

Monica Richards is a TV host and wife of American actor Jay Harrington. The couple is happily married and yet to have children.