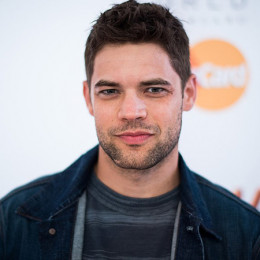 Jeremy Michael Jordan, better known as Jeremy Jordan is an American actor and singer. He came to limelight after she portrayed the character of Jack Kelly in the 2012 musical Newsies and Clyde Barrow in 2011 musical Bonnie & Clyde for which his received theater World Awards for outstanding debut. Jordan has also won several awards for his Disney Theatrical Production, Newsies The Musical. Like his successful career, Jordan is also leading a happily married life with his wife, Ashley Spencer.

Jeremy Jordan was born on 20th November 1984 in Corpus Christi, Texas. His father came from English, Scotish, Welsh and German descent whereas his mother was a Jewish. Jordan's parents divorced while he was still a child after which his mother, Debbie raised him. He is a sibling brother of Joe and sister Jessa.

Jeremy Jordan began acting when he was a teenager. In 2008, he portrayed the character of Alex in The Little Dog Laughed at Hartford Theaterworks, for which he received Connecticut Circuit Circle nomination.

Before that, he was cast in the short movie, Common Change where he played the role of Joel, in 2007. After sharing few small screen, he appeared in an American police procedural, legal, crime drama television series, Law & Order: Special Victims Unit. It was followed by his appearance as Tom Sawyer in Big River at the Goodspeed Opera House in Connecticut.

In 2011, he was seen in the comedy web series, Submission Only created by Kate Wetherhead and Andrew Keenan-Bolger which starred Colin Hanlon, Stephen Bienskie, Lindsay Nicole Chamber and so on.

Though he made several appearances in the TV series and movie, he rose to fame after he played the role of Clyde Barrow in the musical Bonnie & Clyde of Frank Wildhorn. For his outstanding performance, he won Theater World Awards.

He then shared the screen with Queen Latifah, Dolly Parton, Keke Palmer, Courtney B. Vance in the Todd Graff’s directed American musical comedy-drama movie, Joyful Noise. The movie earned $31.2 million box office at the end of the year. He was also seen opposite to Anna Kendrick in the film, The Last Five Years.

This actor has even played a superpower role in the American superhero action-adventure television series, Supergirl.

Currently, Jordan is working on the TV series, The Flash, an American television series developed by Greg Berlanti, Andrew Kreisberg, and Geoff Johns.

Jeremy Jordan is married to Ashley Spencer, since 2012. The couple first met each other through Facebook and went for a dinner date. It was fun, romantic and lovely dinner date where they shared a drink, sang karaoke.

After going to few dates, the couple tied the knot on 8th September 2012. According to him, he was expecting the worse type of things that could happen during the marriage, but all thanks go to his wife, Ashley, who didn’t leave him alone at the altar.

Though the husband and wife are together nearly for five years, they do not share any children till date. Somehow, there is strong bonding between the couples and no signs of divorce.

Currently, Jeremy Jordan has accumulated an estimated net worth of $3 million.

Jeremy Jordan married Ashley Spencer on 8th September 2012. Ashley Spencer is an American actress who is known for her appearance in the musical Grease: You're the One that U Want.