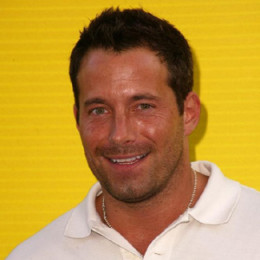 Johnny Messner is an American actor and producer better known for work in the movies Spartan, Tears of the Sun, Running Scared and Anacondas: The Hunting for the Blood Orchid. Apart from movies, he has his appearance in several TV series such as Tarzan, CSI: Crime Scene Investigation, Cold Case and so on. He is a proud parent of twin children with his life partner, Kathryn Morris.

During the period, he developed a love for sports and used to play games on teams at military bases. Later, he changes his interest towards acting and pursues the career in the related field.

Messner began his acting debut from the Irna Philip’s created American television soap opera, Guiding Light where she was seen playing the role of Rob Layne during 1998. Then he was cast in the TV series like Rude Awakening and Angel.

After playing several roles, he was cast in the forensic crime drama television series, CSI: Crime Scene Investigation in 2000 which was one of the creations of Anthony E. Zuiker. The show gained popularity among the viewers and the year, he landed in the Hollywood movie, Dancing in September. The movie starred Isaiah Washington and Nicole Ari Parker.

In 2003, he played the character of Lake in the American action war drama movie, Tears of the Sun directed by Antoine Fuqua. In the movie, he shared the screen along with Bruce Willis, Monica Bellucci, Cole Hauser and Tom Skerrit. He received a positive review for his role in the movie.

The same year, he made his appearance in the adventure horror movie, Anacondas: The Hunting for the Blood Orchid directed by Dwight H. Little which is a sequel to the 1997 movie Anaconda. The movie was a successful hit movie received $71 million in the box-office collection.

It was Messner’s third time that he was working with Bruce Willis in the Florent Emilio Siri’s directed action thriller drama movie, Hostage. Till now, he appeared in more than 36 Hollywood movies and done over 24 TV series.

Johnny Messner is a relationship with actress, Kathryn Morris, since 2010. The couple first met on the set of American procedural television series, Cold Case and began dating after the show.

After living together nearly for 3 years, the duo welcome twins, Jameson West Messner and Rocco McQueen Messner in 2013. They had already decided on the name as they announced the news that they are expecting twins early in the same year.

There is also a speculation that the duo has tied the knot in a secret ceremony but it all turned out to be a hoax. For now, they are just in a simple live-in relationship. As per the sources, he was previously in a relationship Brandi Glanville and Selma Blair.

Messner is one of the versatile actors who has acted in different action thriller movies. He must be paid quite a good salary from his career. Though his net worth is not published yet in the media, he probably has a net worth more than a million. He shares his partner, Kathryn Morris net worth of $4 million.

Born on 21st August 2013, Rocco McQueen Messner is the next twin child of Kathryn Morris and Johhny Messner.