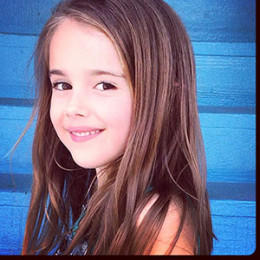 Julia Butters is a talented child actress who started her career in 2014 in the TV series, Criminal Minds. She worked in several TV series like Transparent and American. The actress is doing well with her career and is earning a great net worth.

Julia Butters, a junior American Housewife star blew candles on April 16, 2020 in this coronavirus pandemic. She stepped into 11-years of age.

The starlet who sneaked a Turkey sandwich into the Oscars, reacted on her fan followers birthday wishes two later. Her caption reads, "Thankyou for all the amazing birthday wishes! It made my day very special".

Speaking of her recent activities, Butters is probably busy in her studies and building a career. She started working from a very young age is still continuing. The young star is currently living sound life with her parents.

Looking forward to the #Oscars

Some of her hobbies include traveling, playing piano, and painting. Besides, she is active on several social media including Instagram but the account is managed by her parents.

Net Worth of Julia Butters

The child actor, Julia Butters has an accumulated net worth of around $100thousand. Her acting career is her major source of income. She also makes good money from her commercial works.

Butters worked in numbers of TV series from where she makes a great fortune. She has many upcoming projects from which she can definitely make a rise her net worth.

YOU HAVE GOT TO WATCH #AmericanHousewife @abcnetwork Tuesday 8pm

One of her 2016 movie, 13 Hours: The Secret Soldiers of Benghazi was made with a budget of $50million. The movie collected around $69.4million at the box office. Moreover, the film starred John Krasinski, Pablo Schreiber, and James Badge Dale.