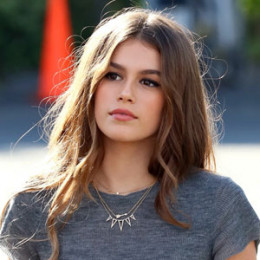 American fashion model and actress, Kaia Gerber is a star kid born to the famous model, Cindy Crawford and her husband, Rande Geber. She has walked on the ramp for various famous designers and brands.

Gerber has modeled for various popular magazines including- Vogue. She has also signed a contract with IMG Models.

As of now, Gerber is in a relationship with her fellow model, Fenton Markell. The couple became close to one another with the help of their celebrity, mothers.

Kaia Gerber was born Kaia Jordan Gerber on 3rd September 2001 in Los Angeles, California. Geber is Virgo. Geber is American by nationality and as far as her ethnicity is concerned, she is mixed race.

Gerber is the daughter of Rande Gerber (model-turned-businessman) and Cindy Crawford (still a supermodel). She has a sibling, Persley walker Geber, who is also a model. She attended Malibu High School. When she was in school, she used to play soccer with her team.

Kaia Geber started her career as a model in 2010. She worked with Versace’ junior line, Young Versace as their model. Gerber later worked as a model for various magazines, Vogue, Teen Vogue and Pop Magazine.

In 2017, Geber made her runway debut for Raf Simon’s Calvin Klein Collection. She also walked on a ramp with her mother for Versace during 218 Springs Fashion Week.

The same year, Gerber clicked her first solo cover for Vogue Paris. In February, she along with Gigi Hadid walked at Versace Milan Fashion Week show. She is beating most of the popular supermodels of the country by her elegance and beauty. She has also signed a contract with IMG Model.

Along with modeling, Gerber is also involved in acting. She appeared in her first TV film, Sister Cities in 2016. She shared the screen with Troian Bellisario, Stana Katic, Michelle Trachtenberg and Jess Weixler among others.

Kaia Gerber has an estimated net worth of 6 digits numbers. However, the exact amount is not made official yet. As per some online sources, the average salary of a Vogue model is between $48k-$52k. She is also a model of the magazine so earns the same amount.

She also modeled for various other magazines from where she could earn a good amount. As of 2018, she is the most followed fashion model on Instagram with over 3 million followers beating supermodels like Gigi Hadid, Kendall Jenner, and Bella Hadid.

Considering her popularity and hard work she might beat them in earning as well. The models have a total net worth of $9.5 million, $22 million, and $9 million respectively.

Kaia Gerber, the star kid is yet to be married. Gerber is currently in a relationship with her fellow model, Fenton Merkell. Her boyfriend, Merkell is the son of English actress, Patsy Palmer, and Richard Merkell.

The duo met each other with the help of their parents' friendship. Since then they became close to one another and eventually started dating.

Geber is a huge fan of Taylor Swift and loves to listen to her songs. She has a celebrity crush on the famous actor, Leonardo DiCaprio.

Below, in the vide, Kaia Gerber talks about her crush,