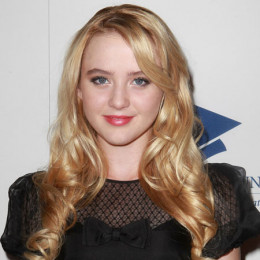 Kathryn Newton is a teen actress who is best known for starring as Louise Brooks in the CBS television series Gary Unmarried. she was just 4 years old when she debuted on the soap opera All My Children. She has also starred in short movies like Abbie Down East and Bun-Bun. She was seen alongside Cameron Diaz in the role of Chase Rossi in the movie Bad Teacher. She was awarded 2013 Young Artist Award for Best Leading Young Actress for her role on film Paranormal Activity 4.

The 22-year-old American actress is allegedly dating The Hills star, Brandon Lee. The pair sparked dating rumors after they're spotted together outside some restaurant in California.

Kathryn Newton and Brandon Lee were seen together at  Giorgio Baldi Restaurant in Santa Monica, California on August 14, 2019. According to US Weekly, the Hills: New Beginnings star's mother Pamela Anderson and his brother also dined with the new pair.

#Hallie am I right?

All in all, Kathryn is an avid golf player and a food lover. She owns two Afghan Hound dogs which cost somewhere around $1000 to purchase from a breeder. Speaking of lifestyle, Newton hasn't shared the details of her house or car as she still lives with her family.

Kathryn Newton has an estimated net worth of $1 million. Her primary source of income is a career as an actress. She earns $30-75,000 per episode for appearing in television series and $50-$100 thousand per movie.