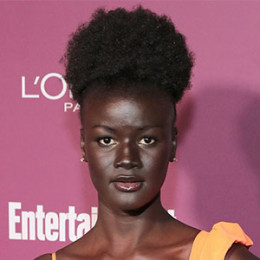 "Care not what they say about the color of your skin let the brilliant light of your soul blind them."

It's a pretty obvious fact to all that the fashion industry is a challenging platform for work. Khoudia Diop, a famous Senegalese model better known as "Melanin Goddess" made everything possible for her as she's been one of the successful fashion models in the world. Previously being bullied for her dark skin complexion, Diop has crossed all the barriers that hindered her way to success.

Is Khoudia Diop Dating? Who is Her Boyfriend? Know about her personal life!

Khoudia Diop is possibly single as of now. The Senegalese model seems focused on her modeling career but what about her romantic life?

Khoudia was once rumored of dating the American-African supermodel and actor Shaun Ross when she shared the picture of them together with heart sign back in February 2018.

Shaun is famous and is the first-ever male African-American model with albinism. Besides, the dating rumor can't be true as Shaun Ross claimed to be Gay.

Famous model Khoudia Diop and her rumored boyfriend Shaun Ross.
It's said the love affair between Melanin goddess and the American  model with albinism, Shaun Ross is just the rumor as neither of the parties admit the fact infront of media. However, the Senegalese model hasn't yet removed the picture of Ross from her Instagram.

Other than that, the 22-year-old model is rarely seen with any men on PDA and she's out of any dating controversies. The model frequently visits New York City cause of her career. The model is presently working in many campaigns and is diminishing color discrimination through her work.

What is the net worth of the famous model Khoudia Diop?

Khoudia Diop holds an estimated net worth of $3 million at present all thanks to her successful modeling career. The supermodel is believed to have a salary of $48,000, however, the salary depends upon the brand and the length of the project.

I miss London already!! My trip with @lancomeofficial felt like a girls trip!! I had so much fun with the team! #sponsoredtrip

Modeling sensation Diop is an active person on social media such as Instagram where she earns over $1,617.75-$2,696.25 per post. She is paid big bucks for endorsing makeup and clothing brands.

The Black-eyed model started her career as a model in 2016 in France where she was discovered by The Colored Girl Project's staffs. Then, she was featured in the same campaign and became famous all over Instagram. She appeared in the advertising campaign called Blend in Stand Out of French cosmetics brand Make Up For Ever.

Meet me today from 1-1:30 at the Beauty & Fashion experience at the L.A. Live Stage!! #betexperience Stylist: @stylebytori

The 5-feet-8-inch model was also featured in a Glamour article called "America, the Beautiful" along with Yara Shahidi who is an African-Iranian young Hollywood television actress.

As of April 2020, Khoudia is associated with the modeling company Storm-la, Fenty Beauty. The black beauty wished her fan followers "Happy Earth Day fellow eartlings" on 22 April, 2020. She showed off her lavish home in Senegal donning sporty look on March 31, 2020.

Khoudia Diop was born on December 31, 1996, in Senegal. She is of Senegal nationality and holds the birth sign of Capricorn. The young model is the third and the youngest daughter in the family and has an older brother and sister. She studied in a college in New York City to study business.

At the age of 3, she was left by her mother because of her dark color an then she started living with her aunt. She was even forced to wash her face daily by her family.

Moreover, while studying at school she was teased for her dark color and often discriminated for her appearance. In order to avoid people's weird behavior she often used to stay in her room for weeks and miss her school.

You May Also Like: Alex DeLena's Personal Life & Past Affairs

Everything changed for the Senegalese fashion model when she shifted to Paris, France at the age of 15 for her further studies.

“As I grew, I learned to love myself more every day, and not pay attention to the negative people.”

She started modeling when she was just 17. It's just been a few years since she stepped in the modeling business and she has a huge fan base all over the world.

The self-stablished model is active on Instagram and garnered over 524k+ followers until now. First, she named herself as Black Barbie in 2014 after joining the Instagram for the first time. Now, she proudly calls herself 'Melanin Goddess' to express pride for her skin color and appearance.