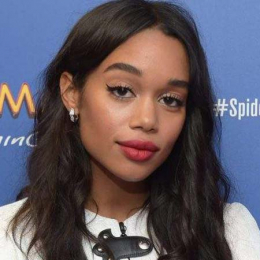 American actress and model, Laura Harrier is best known for portraying the role of Destiny Evans in the American soap opera titled "One Life to Live". She is also popular for her work in films like "Spider-Man: Homecoming", "The Last Five Years", and "4th Man Out". Laura is also famous for modeling for brands like Garnier, Urban Outfitters, and L'Oreal.

Laura Harrier is dating the famous American professional basketball player Klay Thompson. The duo shares a good bond and is together from a couple of years. Moreover, the pair is deeply in love and is seen together in many places.

The pair was recently seen at the Airport together where Klay Thompson came to drop his girlfriend Laura in March 2019.

The love of the duo is visible however, the story about their first meeting is still a mystery. Besides, the couple looks adorable together and everyone including the fans of both parties is waiting for them to share the wedding vows.

Laura was previously rumored for dating a studio manager Gabriel Florenz. However, there is no official confirmation about the couple's relationship.

Laura is currently out of any media controversies and is never involved in any legal issues. The actress is currently busy living with the love of her life and pursuing her career.

How much is the Net Worth of Laura Harrier? Know about her Salary, Earnings

Harris started her career in the film industry after appearing in the 2014 film named The Last Five Years. Since then, she appeared in many films like Galyntine, 4th Man Out, Spider-Man: Homecoming, and BlacKkKlansman. What's more, she also worked in the television series like One Life to Lie and Unforgettable. Further, some of his famous films are,

As for Laura's modeling career, she modeled for many companies like Garnier, Urban Outfitters, American Eagle, and L'Oreal. Besides, she also appeared on the pages of brands like Vogue, Cosmopolitan, Elle, and Glamour.

Furthermore, In 2016 Harrier starred in The Realest Real which is a French fashion brand named Kenzo. As of now, she works for brands like Calvin Klein and Louis Vuitton and is an ambassador for Italian jewelry brand Bvlgari.