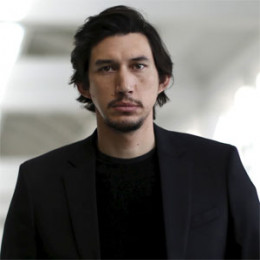 American actor, Adam Driver is best known for his portrayal as Kyloe Ren in the movie, Star Wars: The Force Awakens. He received three Emmy nominations for his role in 'Girls'. Driver is active in the film industry since 2009. He has worked on numerous movies and TV series. In 2010, he debuted on Broadway with a play, Mrs. Warren's Profession. He is a married man, he tied the knot with his longtime girlfriend, Joanne Tucker in June 2013.

Adam Driver was born on November 19, 1983, in San Diego, California, the USA. He is American and belongs to mixed (English, German, Dutch, Irish, Scottish and Swedish ancestry) ethnicity. He is the son born to Nancy Wright (née Needham), a paralegal, and Joe Douglas Driver.

His father is from Arkansas and his mother is from Indiana. After his parents' divorce, Driver moved to  Mishawaka, Indiana along with his mother and sister. He was just seven-years-old at the time. Later, his mother married to Rodney G. Wright who is a minister at a Baptist church.

Driver attended high school at Mishawaka High School. His step-father is a religious person who influenced his upbringing. He used to sing choir at church.

In an interview with M Magazine, Driver revealed that he was a 'misfit' during his teenage days as he climbed radio towers, set objects on fire, and also co-founded a fight club.

After finishing his high school, Driver worked as a door-to-door salesman selling Kirby vacuum cleaners and as a telemarketer. He joined the United States Marine Corps shortly after the  September 11 attacks. He was assigned to Weapons Company, 1st Battalion, 1st Marines as an 81mm mortarman during his military days.

Driver left the military service after breaking his sternum while mountain biking. He worked there for 2 years and 8 months before his accident. After the Marine Corps, he joined the University of Indianapolis for a year and later transferred to the Juilliard School to study drama.

Driver struggled a lot to fit into school because of the different school environment. From 2005 to 2009, he was a member of the Drama Division's Group. In 2009, Driver graduated with a Bachelor of Fine Arts degree.

Adam Driver moved to New York City in 2009 in order to pursue his career in acting. He appeared in both Broadway and off-Broadway productions. He worked as a busboy and waiter before entering into an acting career. His first Broadway play was Mrs. Warren's Profession (2010). 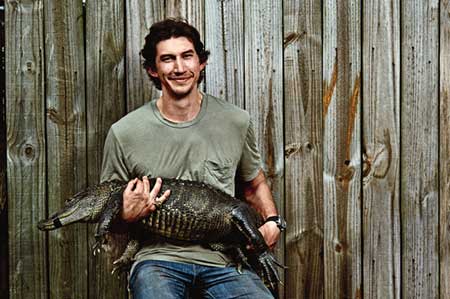 Driver made his feature film debut in 2011. He appeared in Clint Eastwood directorial movie, J. Edgar. He rose to fame after casting in the HBO hit comedy-drama series Girls, in 2012. He portrayed Adam Sackler, an emotionally unstable guy and the boyfriend of lead actress, Hannah Horvath.

Driver received three Emmy nomination for  Outstanding Supporting Actor in a Comedy Series for his role in the movie. The same year, he appeared in two movies, Steven Spielberg's Lincoln as Samuel Beckwith and Lev Shapiro in Noah Baumbach's Frances Ha. He also worked on short movies, Not Waving But Drowning and Gayby.

His other screen credit includes Bluebird, Inside Llewyn Davis, Tracks, Hungry Hearts, This Is Where I Leave You, While We're Young, Midnight Special, Silence, Paterson, You Don't Know Jack, and Logan Lucky.

Driver won his first Best actor for his role in Hungry Hearts at the 71st Venice International Film Festival.

In 2015, Driver appeared in the movie, Star Wars: The Force Awakens. He played the villain character, Kyloe Ren in the movie. His performance in movies was highly appreciated by audiences and critics. Film critic, Peter Bradshaw appreciate his performance on the movie and called him,

"Gorgeously cruel, spiteful and capricious...very suited to Kylo Ren's fastidious and amused contempt for his enemies' weakness and compassion."

Once he was approached for the role of Dick Grayson/Nightwing in Batman v Superman: Dawn Of Justice but he refused the offer.

In early 2016, Driver hosted one of the episodes of Saturday Night Live and the same year, he featured in the short play The Strangest Kind of Romance. His most recent released movie was Star Wars: The Last Jedi which was commercially successful at the box office.

In 2018, Driver is all set to impress his audiences with his three ventures, The Man Who Killed Don Quixote, Black Klansman, and Omniverse. He would be appearing as Kylo Ren in the third installment of Star Wars entitled, Star Wars Episode IX (2019).

The Hollywood actor stands at a height of 1.8 meters. His net worth is $8 million. He made a huge amount of money from his acting career.

Here the list of his movies that made the good collection at the box office:

Adam Driver is married to his longtime girlfriend, Joanne Tucker. The duo tied the knot in June 2013, at a destination wedding with guests from his hit HBO series in attendance. 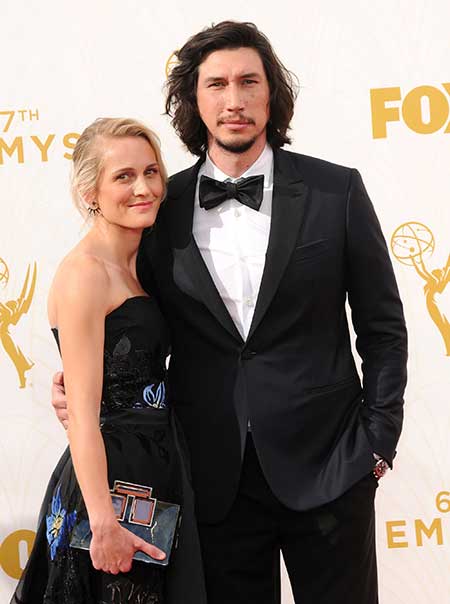 The duo first met just after Driver left Military. The pair shared a good bonding with one another. Once in an interview, he revealed, his wife taught him about Gouda Cheese.

Currently, Driver is living a blissful married life along with his wife in Brooklyn Heights, New York City with their rottweiler-pit bull mix, Moose. The couple a secret child as per several sources.

Driver is a great admirer of Pedro Almodóvar, Paul Thomas Anderson, Michael Haneke, and Mike Leigh, and often expressed his interest towards working with him.

Check out the interview with Adam Driver at
The Late Show with Stephen Colbert,

Joanne Tucker runs a nonprofit organization, Armed Forces that performs theater for military communities. The duo is together since 2015.