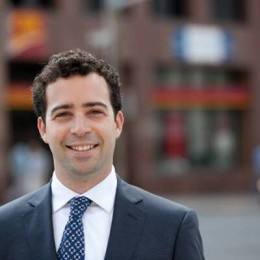 Matthew Kaplan is the CEO of one of the rising TV production company, "Chapter One Films". Kaplan guides day to day development and also the production of company's entire film slate. After he began Low Budget division at Lionsgate Entertainment, he became a founder of Chapter One Films.

Kaplan was the director of Development at CBS Television Network. He was also the producer of the movies The Lazarus Effect, Viral, Incarnate Before I Fall. Besides this, he also works as the president of newly promoted Awesomeness Film division. Kaplan tied a knot with Australian Actress Clarie Holt on 2016 and just before a month of their anniversary, the duo split up and filed for divorce citing irreconcilable differences.

Education and Career of Matthew Kaplan

Matthew Kaplan graduated with BA in History and film from Columbia University. His first industry experience was as an intern at the United Talent Agency and for the Todd Phillips Company.

Matthew Kaplan started his career from the Low budget division at Lionsgate Entertainment. After that, he became the founder of Chapter One Films and also he produced more than 125 episodes of multi-platform content including the CLARK & MICHAEL, Laude D web series, starring Michael Cera and Clark Duke.

Later, Kaplan was hired by Awesomeness TV (the youth-Skewing digital media company) which was owned by DreamWorks Animation as the president of newly promoted Awesomeness Film division.

Matthew Kaplan is one of the most talented and creative executive producers and for someone so successful, it's without a doubt he is living a luxurious life. His net worth is definitely in six-figures yet the exact amount of his net worth is still under the review.

He has produced many films which made a significant collection at the box office. Some of the movies and their box office collection are:

Matthew Kaplan is ex-husband of Australian Actress Clarie Holt. The pair got engaged in July 2015. Holt made the big announcement through her Instagram account.

A year after their engagement, the couple tied the knot in a private ceremony organized by some friends and family members. Later, Matthew filed a divorce in early April on 2017 one day before their wedding anniversary. The citation in divorce file mentioned about irreconcilable differences in their conjugal life. The estranged couple does not share any children together.

In 2016 the couple tied a knot in a private ceremony organized by some friends and family members. Later Matthew filed a divorce in early April on 2017 before one day of their wedding anniversary. The citation in divorce file mentioned about irreconcilable differences in their conjugal life. The couple was separated before their one year marriage anniversary.