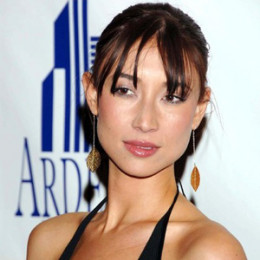 Meiling Melancon, better known as Mei Melancon is an American actress, screenwriter, and former fashion model. She has made her appearance in the Hollywood movies including Rush Hour 2, X-Men: The Last Stand, Irreversi, and American Romance. She is also seen in the few of the TV series such as CSI: Crime Scene Investigation, Deadwood, Legends of tomorrow and The L Word.

Mei Melancon was born on 3rd March 1980 in the Philippines. Her mother is of French heritage whereas her father is of Chinese and Japanese descent. She was raised in Japan, Korea, and Hong Kong. She is the second oldest child in a family of 11 children.

At the age of 5, her mother taught her to play the guitar, soon, she became the member of a children’s band called Blossoms. She traveled throughout the Asia and Europe during childhood, and later, she along with her family moved to the United States.

She was to pursue her career in law. However, things changed, and her friend introduced her to the renowned modeling agency Kim Dawson in Dallas, Texas. Then she began modeling for both prints and commercials. She modeled nearly for five years and appeared in over 75 commercials worldwide.

She also took acting classes at Stella Adler and Larry Moss Studios during the period and began her career in acting.

Melancon began her acting debut from the George Gallo’s written and directed action comedy Double Take which starred Eddie Griffin and Orlando Jones. The movie was inspired by the 1975 drama Across the Bridge based on a short story by Graham Greene.

Besides this, she appeared in the American martial arts buddy cop action comedy movie, Rush Hour 2. It was her career's biggest opportunity as she got a chance to work with Jackie Chan. The movie also starred Chris Tucker, John Lone, Alan King, Zhang Ziyi and Harris Yuilin. It made a collection of $347.3 million all over the world.

During the period, she was one of the successful models and signed to Wilhelmina Modeling Agency. In 2004, she portrayed the character of Vanessa Green in the American procedural forensics crime drama television series, CSI: Crime Scene Investigation created by Anthony E. Zuiker. She shared the screen along with William Peterson, Marg Helgenberger, and Gray Dourdan.

Then she appeared in few TV series including Deadwood and Kitchen Confidential. Then in 2006, she was cast in the Brett Ratner’s directed movie X-Men: The Last Stand along with Hugh  Jackman, Helle Berry, Ian McKellen, Famke Janssen, Anna Paquin, Patrick Stewart and so on.

It premiered at the 2006 Cannes Film Festival on 22nd May 2006 breaking the Memorial Day weekend record with $102.7 million. At the end of the year, the movie collected $459.4 million and was the fourth-highest in domestic grosses.

Later, she made her appearance in the movies such as Pathology, Loaded, The Truth About Angels. Apart from acting, she co-wrote the thriller American Romance in 2014 and directed a short movie, Café on a Staircase and a comedy short movie Inner Beauty with Tim Nackashi which starred comedian star Liz Carey and Victoria’s Secret model Frankie Rayder show on funnyordie.com.

Not only this, she has co-written a short movie Stephany + Me with Ben Duhl and also produced and starred in a PSA written by Comedian Todd Glass that was covered by the Huffington Post, Perez Hilton. She has written articles for Giant Robert Magazine too.

Moreover, she made an appearance in a 2014 American 3D science fiction movie Shockwave: Darkside 3D written and directed by Jay Weisman.

Talking about Melancon’s personal life, she is single. Being a privacy lover, she has kept information regarding her love and affair away from the media. As per the sources, she once dated actor Travis Fimmel, in 2007. Their love relationship did not long last. After nearly a year of romance, they broke in 2008.

During her free time, she enjoys writing, surfing and practicing Wushu Kung Fu.

Mei Melancon is one of the versatile actresses of the industry. She has worked in few of the box office hit movies such as Rush hour 2 which earned $347.3 million and X-Men: The Last Stand collected $459.4 million. She must have probably drawn a decent paycheck from those movies. Her actual net worth his not yet made public but her successful career suggests she has value around seven figures.