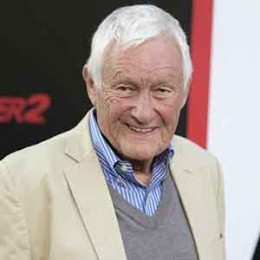 Orson Bean is one of the well-known names in Hollywood and had started his career as a magician after his military duty. He moved from magician to stand-up comedy and eventually found his way into acting. He starred in hit TV series and worked on notable movies like The Equalizer 2 and The Hobbit trilogy.

His death was confirmed on 10 February by the Los Angeles County coroner's office. Capt. Brian Wendling of the LA Police department claimed Mr. Bean was struck by two drivers, with the second vehicle striking him seriously. while crossing the street in Venice Boulevard and Shell Avenue, Los Angeles.

The LA County believes he was killed due to "traffic-related" fatality. "Grace and Frankie" Orson was walking in the Venice neighborhood while he was clipped by a vehicle and fell. The car going through westbound did not see him and went down.

Also skilled in writing, Orson bean wrote his life’s biography. As for his love life, Orson bean was married thrice in his life.

He was previously married to actress Jacqueline De Sibour in the year 1956. Their relationship lived for 6 years and they got divorced in 1962. They also have a daughter together named Michele Bean.

Followed by his split from Sibour, he tied a knot with Carolyn Maxwell in 1965. The duo couple called it quits in the year 1981. During the time, Bean became a father of three and they named them, Max, Susannah, and Ezekiel. Their daughter Susannah, in 1997, was married to conservative commentator Andrew Breitbart who died in 2012 due to heart failure.

After 12 years since the separation from his second spouse, he was spotted with Alley Mills; an actress famous for her role in the TV series "The Wonder Years". Orson walked down the aisle with Alley in spite of the 23 years of the age difference between them.

Bean and Mills turned their boyfriend-girlfriend relationship into holy matrimony in 1993. From then, they lived blissfully in Los Angeles till he passed away. He was one of those 500 guests to attend Jane Seymour and James Keach's wedding ceremony in May 1993.

How Much Is Orson Bean Net Worth?

He has worked on TV, in movies, in Broadway and also has a book deal so it won't be wrong to say his hard work has definitely paid off. An actor earns a salary of $150,000 to a whopping $1million by working on TV and he has had many shows and guest appearances on TV.

He is also in the movie The Equalizer 2, starring Denzel Washington, and Pedro Pascal, which grossed $102.1 million in the United States and Canada, and $88.4 million in other territories, for a total worldwide gross of $190.5 million. He also worked on The Hobbit trilogy starring Richard Armitage, which cost around $765m to produce and made $2.916 billion worldwide thus far. He also has books selling on Amazon:

These definitely have made his net worth what it is today and it's no surprise that it amounts to $4 million dollars.

Orson made his career debut in acting with a one-hour syndicated television anthology series produced by WOR-TV in New York City. The series premiered on April 14, 1952, and ran for 73 episodes through 1954. He also worked on Westinghouse Studio One as Harvey B. Hines in the same year. He worked on various tv shows like Robert Montgomery Presents in 1954 and on The Best of Broadway and The Elgin Hour in 1955 before he finally moved into movies.

Orson made his debut in the movies from the movie How to Be Very, Very Popular as Toby Marshall in 1955 working alongside the likes of Betty Grable, Sheree North, Bob Cummings, Charles Coburn, and Tommy Noonan. He later worked on some great movies like Anatomy of a Murder as Dr. Matthew in 1959 and Miracle on 34th Street as Dr. William Sawyer in the same year.

He made his Broadway debut on April 30, 1954, in Stalag 17 (1953) producer Richard Condon's only Broadway production as a playwright, "Men of Distinction", along with Robert Preston and Martin Ritt.

The act had flopped but later he hosted a summer-replacement television series produced at the Blue Angel and won a Theatre World Award for his work in the 1954 music revue "John Murray Anderson's Almanac", which co-starred Harry Belafonte, Polly Bergen, Hermione Gingold, and Carleton Carpenter.

But he enjoyed his greatest personal success on Broadway in the 1961-62 season, in the Betty Comden and Adolph Green musical "Subways Are for Sleeping", which was directed and choreographed by Michael Kidd and featured music by Jule Styne.

Although he has worked on many movies and series, it was as a television personality that paved his road into the popular consciousness, as well as the popular culture.

Orson Bean was born Dallas Frederick Burrows on July 22, 1928, in Burlington, Vermont. His mother is Marian Ainsworth (née Pollard) and his father is George Frederick Burrows. The newborn Dallas Burrows was a second cousin once removed to Calvin Coolidge, who was President of the United States at the time of his birth.

His father was a founding member of the American Civil Liberties Union, a fund-raiser for the Scottsboro Boys' defense, and a 20-year-old member of the campus police of Harvard College. Bean graduated from the Cambridge Rindge and Latin School; and between 1946 and the end of 1947, he served 18 months in the United States Army. And while stationed in postwar Japan, he developed and refined a magic act during his off-duty hours.

Later, Bean began working in small venues like a stage magician before transitioning in the early 1950s to stand-up comedy. It was during that time when he stopped using his birth name professionally and adopted the stage name Orson Bean.

In an interview on The Tonight Show with Johnny Carson in 1974, Bean recounted the source of his new name and credited its origin to a piano player named Val at "Hurley's Log Cabin", a restaurant and nightclub in Boston, Massachusetts, where he performed.

The musician used to suggest names to Orson to use onstage and one day he gave him the name, "Orson Bean", and the comedian received a great response from the audience. So, given his success on that occasion, Bean decided to keep using the name.

Maxwell is an actress and fashion designer, famous for her role in the movies like Tattletales and Black Mirror.

Orson spent his life in bachelorhood for about a decade and then he was spotted with Alley Mills who is an actress and she is famous for her role in the TV series "The Wonder Years".

Orson and Jacqueline welcomed a daughter, Michele Bean before their divorce and she is the first child of Orson.

He is Orson and Carolyn second child but Orson's third child in his life.